The Movistar Yamaha MotoGP team continues its relentless pace this weekend as the paddock heads from the Twin Ring Motegi circuit in Japan to Phillip Island in Victoria, Australia, for the second consecutive race weekend, the Michelin Australian Motorcycle Grand Prix. 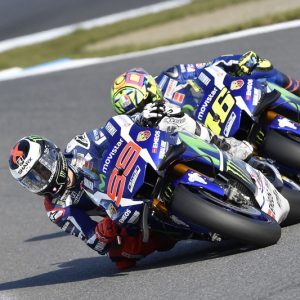 After the Grand Prix of Japan, the Movistar Yamaha MotoGP team immediately moved on to the next stage on the MotoGP calendar, the Australian Motorcycle Grand Prix at the scenic Phillip Island circuit.

Valentino Rossi looks forward to defending his second place in the championship from his teammate Jorge Lorenzo.

As one of the most successful riders at the Phillip Island circuit, he will be using his experience to secure a top result and visit the Australian rostrum again. After taking third place in 2000, the Doctor enjoyed an impressive five-year winning streak from 2001 to 2005, followed by five more consecutive podium finishes in the premier class. He claimed second place in 2008 and 2009 and scored three third places in 2006, 2007, 2010. Rossi returned to the podium again three years later with a third place in 2013 and a first place in 2014, when he, teammate Lorenzo and Monster Yamaha Tech3‘s Bradley Smith made it an all-Yamaha podium.

Lorenzo is also prepared to take on the competition on Phillip Island, one of his favourite circuits where he got to lift a trophy after the race many times. He scored two second places in the premier class in 2010 and 2012. From that point on the Mallorcan has not finished off the podium, securing the victory in 2013 and two more second places in 2014 and 2015. Lorenzo aims to keep the trend going this year and is ready to enjoy the beautiful Phillip Island circuit whilst fighting for second place in the championship.

Phillip Island became a permanently constructed circuit in 1956, but was already staging motorcycle races since 1931. The circuit hosted motorcycle Grand Prix events until an extensive renovation took place in 1968. The 4.4 km Australian circuit made a comeback in 1989 and 1990 and became a regular fixture once more from 1997 onwards. Each year the track is a crowd-pleaser for both the MotoGP paddock and fans, who can‘t get enough of its fast and fluid corners (seven left and five right), exotic wildlife and stunning location right next to the ocean.

The bad thing is that we took zero points in Motegi, but the good thing is that we showed that we are strong. Phillip Island is a fantastic track and a place that I like a lot. We have to try to be fast and strong there too. We already tested there with Michelin, but unfortunately we now go there after a very bad season, our worst season on paper. We hope that the weather conditions won‘t be very bad, because if it‘s cold it can be dangerous. We hope for good weather and we‘ll see

It was a shame in Motegi, but we were at least able to fight for the victory despite the wrong decision with the tyre. My crash and Vale‘s gave Marc the title but honestly he was the most consistent rider. Now we have to fight for the second position in the championship, though the important thing – and why we are here – is to be a champion. Phillip Island is going to be a bit strange because the fight for the championship is over, but I would like to do a great race and try to win. That`s my goal for the next three races and take the vice champion title as well.

Are  you looking for Australian Grand Prix Accomodation? Look our motogp hospitality packages for Japan Gp, the best choice for your MotoGP Experience!

MotoGP: Rossi is 20th, Lorenzo 19th in rain soaked Philip IslandMotoGP, Motor Racing, Motorsports
At RTR Sports Marketing we use cookies to bring you the best site we can. If you're cool with that, click OK. Or to find out more, read our Cookie Policy.OkCookie policy