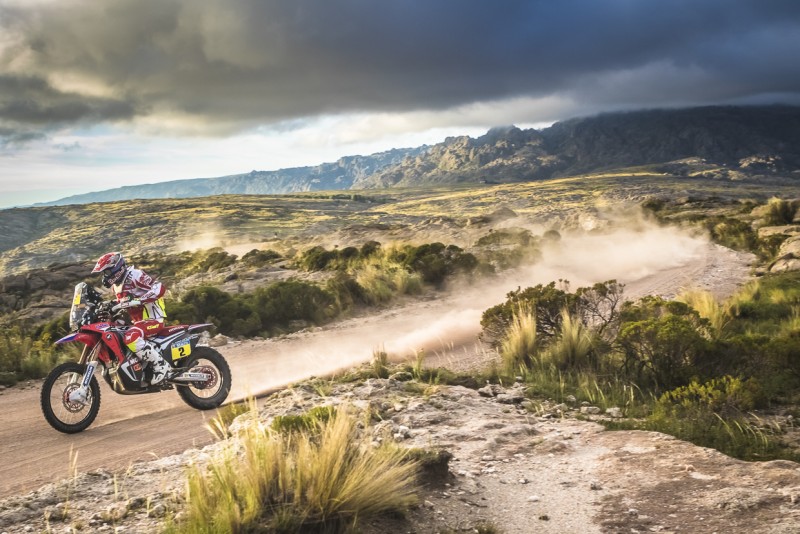 No change in the overall standings today, after Team HRC riders Joan Barreda and Paulo Gonçalves had established themselves as race leaders at the end of yesterday’s infernal stage. All five team members finished in the top sixteen.

It turned out to be a positive outing for Joan Barreda and the other components of the Team HRC camp, on the third stage from San Juan to Chilecito. Although it was anything but easy, after the gruelling and epic stage of yesterday, today’s event still required a fair amount of technical finesse, and a high degree of concentration, especially in the latter part, as riders were forced to tackle a very narrow, challenging section along the home-straight.

Joan Barreda opened the track throughout the stage and finished the section against the clock, on the Honda CRF450 RALLY, with the day’s third-best time. The Spaniard holds off his adversaries with an overall 5’30’’ lead ahead of second place team-mate Paulo Gonçalves, who finished fifth on the day, which sets him up nicely for following stage.

Jeremías Israel, is another happy camper, after putting in another noteworthy and trouble-free display, finishing eighth in the stage and in the overall standings. Hélder Rodrigues will be in a good position to attack from after a fifteenth place finish, which leaves him lying in ninth overall, just one second behind team-buddy Jeremías Israel.

Laia Sanz, was once more among the top riders, repeating her 17th place of the opening day.

Best of the Honda South America Rally Team was once again Chilean Daniel Gouet, in 24th in both the stage and overall.