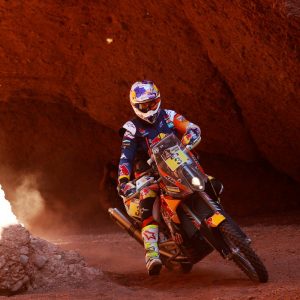 Red Bull KTM Factory Racing’s Toby Price on Monday resumed his Dakar Rally challenge in Argentina with another stage win as riders set out on the second half of this 9,000km epic. It was the Australian’s fourth stage victory so far in this edition and he now assumes the overall lead by a narrow two minutes 05 seconds margin over Portugal’s Paolo Goncalves.

Price’s win came immediately after the one rest day in Salta, but there are still many kilometers left to ride and race officials have promised difficult conditions and challenging navigation, particularly in the second half of the rally. He finished the stage in four hours 33 minutes and 14 seconds, giving him a five-minute 17-seconds lead over Goncalves. The stage went from Salta to Belén and gave riders the opportunity to test their skills in the sand dunes. Pablo Quintanilla was third, some six minutes 32 behind Price.

Price: “The first part started out on big open roads and I think we dropped a little bit of time there. But just getting through it was a pretty fast track so we were looking forward to the second part where it was going to get more technical and more difficult. We did pretty well in the sand dunes and we pushed through the navigation.”
The Australian cautiously confirmed that he was getting more comfortable and more confident with the navigation but underlined that there was still a long way to go to the finish at Rosario.
Holding at fourth place in the stage and now third in the overall standings is Slovak KTM rider Stefan Svitko, who is contesting his seventh Dakar and is aiming to improve on his overall fifth place last year.
It was also a good day for Price’s KTM factory teammate Antoine Meo of France, the winner of stage seven and the team rookie. Meo rose to the challenge of a difficult stage and finished eighth just under 11 minutes behind the leading time. He is now sixth overall.

Meo said he had been quite nervous to have the responsibility of opening the stage for the first time. “At first it was it was quite fast and I didn’t lose a lot of time, only about 35 seconds. In the second part I slowed down and tried to do good navigation and that was pretty good because I didn’t make a mistake. I’m learning a lot, I have to improve and keep going.”
Fellow KTM factory teammates and Spaniards Jordi Viladoms and Laia Sanz finished the stage in 17th and 18th place. Viladoms who fought off a fever last week said it had been a good day and a nice stage. “At the beginning I was trying to push but it is not possible to recover energy in just one day. I’m getting better but I need more time, and at the end I slowed down. There was soft sand and camel grass so it was difficult to ride.”

Sanz also said she was not in the best form on Monday: “It was not my best. When you don’t feel so good its better not to push because you can make mistakes and crash. But I’m happy I’m here, I didn’t miss any waypoints and I didn’t make mistakes. I slowed down, especially in the last part but the navigation was not so difficult and I hope tomorrow is going to be better.” Sanz is now overall 14th and Viladoms is 15th .

On Tuesday riders face another challenge, the first part of a second marathon stage where they must preserve energy, machinery and tires to last overnight and through to the end of Wednesday’s stage. They will overnight in an isolated bivouac without assistance from their teams. Organizers have promised significant challenges including almost all off-piste riding in vegetation-scattered dunes and on harder surfaces.