As a brand that wants to support sports and invest in teams or athletes, it’s important to know what your aims are – and whether you want to provide monetary support only, or be involved in the development and success of your sponsor in the longer term.

Of course, both strategies – donation and sponsorship – are worthy, and definitely have their place. Although both sports sponsorship and donation call for giving money to a third party in an effort to improve their performance, the two things are substantially different from a marketing point of view – or, they should be.

On the first hand, sponsorship involves the sponsoring company acquiring rights from a sports team, athlete, or event – i.e, the rights to use their name, images, video assets, visibility and often key players, in order to leverage awareness in order to reap marketing and commercial benefits. Sponsorship in sports is a strategic marketing tool, and a very effective one.

On the other hand, donation shouldn’t ever be used for marketing purposes. Although it may be utilised as a PR move, donation should be considered almost entirely in the realm of goodwill or charity – where companies, individuals or brands donate revenue to those individuals or organisations that they want to support. To expect anything marketing-wise to come as a result of a donation is not only unethical, but also likely to be illegal and could easily be classed as bribery.

The distinction, then, needs to be clear.

So, how can sponsorship and donation get mixed up when it comes to sports?

Without delving too deeply into the issue, at a surface level campaigns that have a Corporate Social Responsibility (CSR) angle could be seen to walk the line between charitable donation and long-term strategic sponsorship.

It should be made clear that this isn’t the case, however. Take a sports sponsorship campaign that sponsors a youth football team, for example. Sponsorship in this case could involve paying for the kit, helping with the costs of the stadium, or having your brand’s logo on the team’s newsletter or digital communications. As a sponsor, you have a strategic aim and are working with the team in order to provide support and get your branding in front of those that are invested in their success.

Making a donation to the said youth football team means offering charitable support, with no material gain expected for your brand and no investment in what the team does with the money you’ve donated. You cannot expect to influence future decisions made by the team after making a charitable donation.

If you’re making a donation to a team or organisation that is registered as a charity, you are entitled to tax relief for the donation. These donations can be deducted from your company’s profits for the year in which the donation is made, meaning you may be liable to pay less corporation tax. More information on Corporate Gift Aid is available from the Charity Tax Group and Gov.uk.

Gov.uk sets out the difference between sponsorship and donation clearly: “Charity sponsorship payments are different from donations because your company gets something related to the business in return.” Sponsorship can still mean tax relief though, as long as the organisation you’re supporting is registered as a charity. In this case, you may be able to claim sponsorship payments as a business expense. 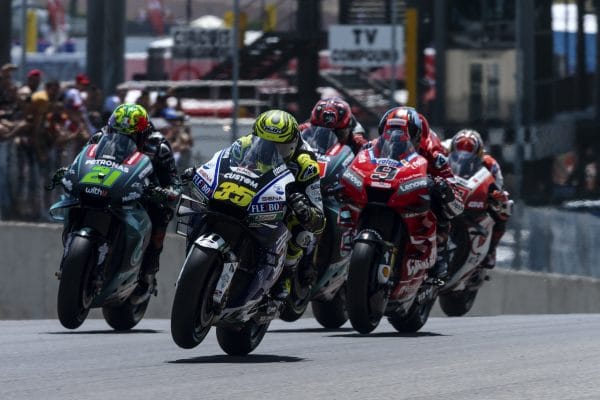 Sponsorship and donation in MotoGP

If you’re investing in MotoGP it’s more than likely that you’ll be spending your money on sponsorship, rather than donation – MotoGP is a corporate body that can provide mutual benefits for brands who want to work with its teams or drivers. If you want to get into MotoGP sponsorship (and we think you should!), look to the examples set by brands including Tissot, Michelin, DHL, Singha, Shell, Oakley and Red Bull. To find out more about MotoGP sponsorship see the link.

Want to learn more about sponsorships and donations in sport? Talk to RTR Sports Marketing today.