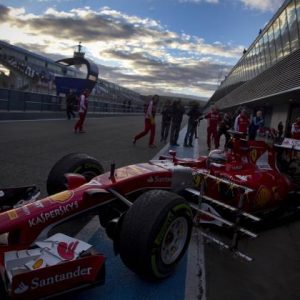 Kimi Raikkonen with the new SF15-T finished in the first place, during the final day of the pre-season test in Jerez. Scuderia Ferrari finished for third day in the first position, and set the fastest lap time of the week in Jerez.

Marcus Erricson with the new Sauber finished in the second place, few seconds ahead of Lewis Hamilton’s Mercedes who covered the most laps compared with the other teams.

McLaren faced a lot of issues the last day of the test and Jenson Button completed just 35 laps. The British team with the new Honda engine managed to do only 79 laps over the four days, compared with Mercedes, which had more than 500, it is obvious that the team is far behind the others.

Still the team believes that they had a positive test. Matt Morris, McLaren’s engineering director said: “We have had some operational issues – all of us working together as a team for the first time – things you take for granted when you have been with an engine supplier for many years. You drop the ball sometimes, like saying getting oil levels wrong and all these sorts of things. We have had a few issues like that.

“We have also had some minor electrical issues, which resulted in a lot of downtime but have actually been relatively easy to fix”

“The main thing is that we have not been burning bodywork or blowing up engines. I am pretty happy that we are going to come out of this test with no major issues to resolve.”

Lewis Hamilton was very happy with the new Mercedes, even when he had a little spin during the morning session he was saying to his mechanics that they did a great work during the weak.

The British admitted that the car is a very reliable, that is one of the most important factors for a F1 car.

Mercedes covered 1,419 miles over the week, and more than 500 laps in Jerez. The car is similar with the 2014 car, with some extra improvements.

Lotus managed to run their car for two and a half days. Their initial plan was to take part to the second pre-season test in Barcelona, but they ended ahead of their schedule and gave the opportunity to Romain Grosjean to drive the new E23.

“The car is most definitely a big step forward over last year, even though we are still short of a lot of parts so it’s not very representative.

“It’s surprising we were running as quickly as we were given that. It’s very encouraging – in fact, Romain was just saying that the car feels a lot like the 2013 car. He’s a lot happier.’” Alan Permare told.

Even that it is too early to know what will happen to the 2015 season, I believe that the Mercedes will manage to win the World Champion title again, but Ferrari and Red Bull will try to stay close to the Germans and improve their engine through the season, which may give them the chance to compete the Mercedes.