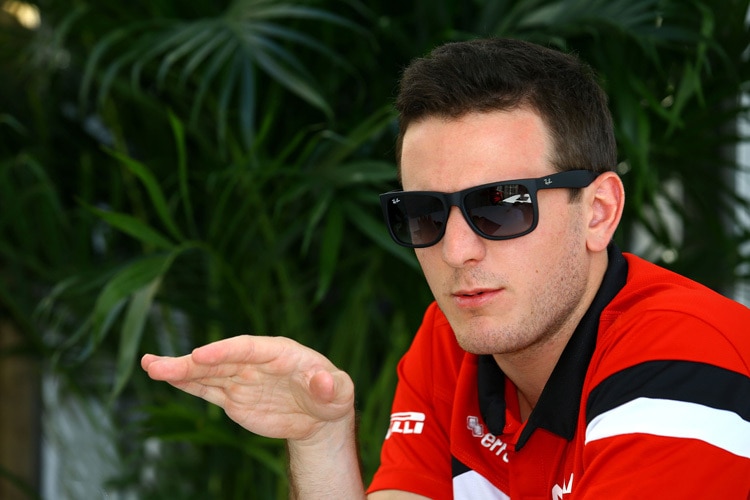 2013 GP2 champion Fabio Leimer is set to race in this weekends Formula E season finale in London. The Swiss driver will replace regular driver Jaime Alguersauri in the Virgin Racing car and will partner Sam Bird; who still has a mathematical chance of winning the championship after the double-header weekend.

Leimer has driven a Formula E car before having been Amlin Aguri’s reserve driver after driving for them in pre-season testing last August at Donington Park. Leimer has recently been signed by the Manor F1 team as a reserve driver.

“As a racing driver, I love a challenge and so joining Virgin Racing for the Visa London ePrix will be a great test,” Said Leimer, “It’s going to be an incredible and unique experience racing on the London street circuit and an even more special occasion racing for a new team in their home race. I’m looking forward to racing alongside Sam and hopefully contributing to a successful season finale for the team.”

It is not known why Alguersauri, who has raced for the Virgin team all year, has been replaced; although the Spaniard had driven un-competitively for most of the season compared to team-mate and race winner Bird.

“We are delighted to have a driver of Fabio’s quality and experience join the team for the final race of the season in London,” Alex Tai, Virgin team principal, “This weekend promises to be a fantastic end to a great championship and so we’re looking forward to seeing Fabio and Sam finish the season for the team in style.”

Leimer will be making his Formula E race debut at the same time as Simona De Silvestro, Sakon Yamamoto and Oliver Turvey; who have all been bought in to replace other drivers.

The London ePrix event is the last round of the Formula E 2014/2015 season. The event will see two races take place on Saturday and Sunday; a format unseen all season. 6 drivers have a mathematical chance of winning the championship, with Nelson Piquet Jr leading the standings ahead of Lucas Di Grassi, Sebastien Buemi, Nicolas Prost, Jerome D’Ambrosio and Sam Bird. 60 points separate Piquet from Bird.

F1: Mercedes Wehrlein and Ocon fastest in rain-hit Austria testFormula1, Sport News, Sport Sponsorship, Sports Marketing
At RTR Sports Marketing we use cookies to bring you the best site we can. If you're cool with that, click OK. Or to find out more, read our Cookie Policy.OkCookie policy