Lewis Hamilton has taken pole position for the 2015 Hungarian Grand Prix after a scintillating lap that gave him a half a second advantage over team-mate and 2nd placed qualifier Nico Rosberg. Lewis is seeking his fifth win in Hungary and has dominated the event so far by topping every practice and qualifying session. 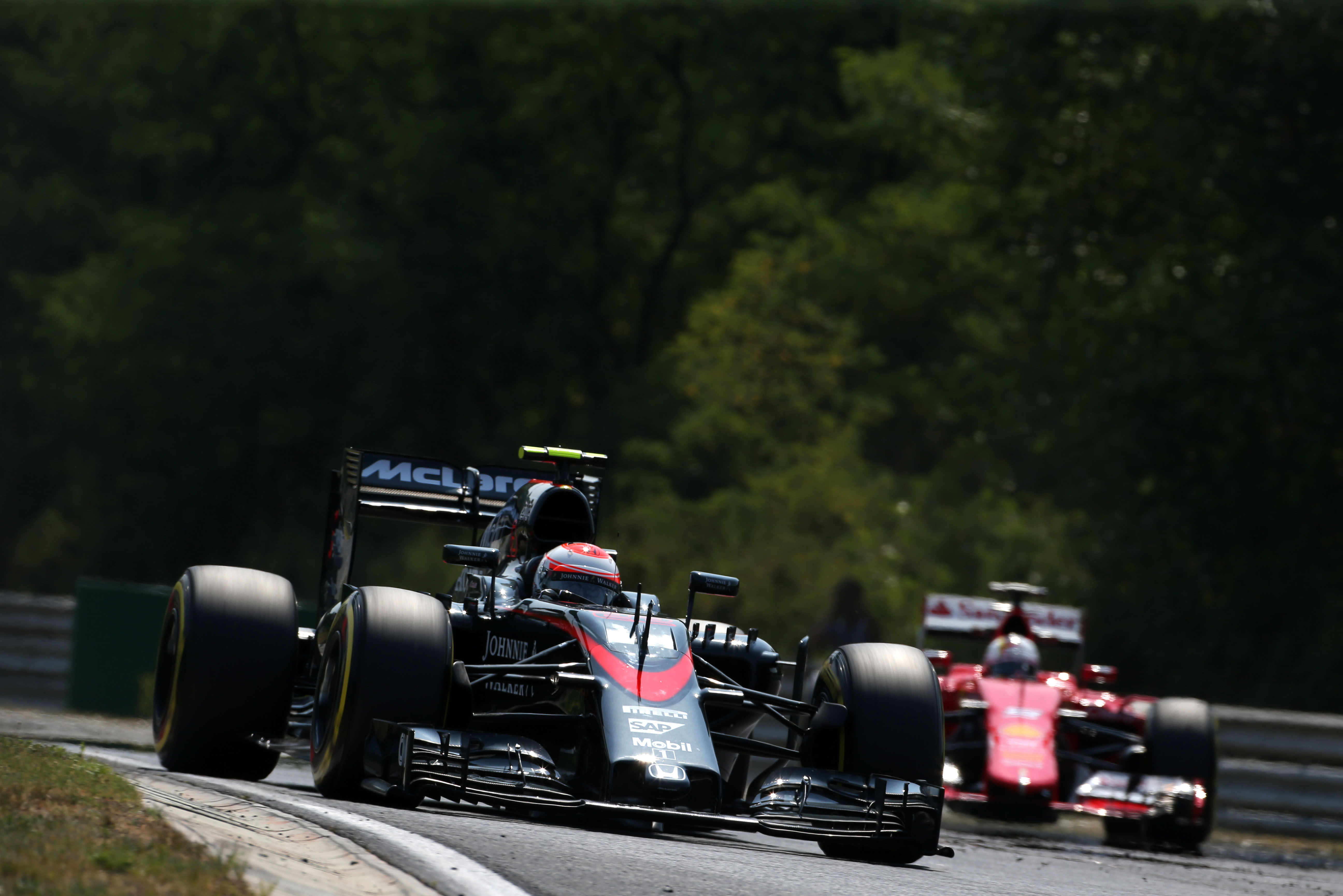 Lewis Hamilton continued his rule over the top spot in Hungarian Grand Prix practice on Saturday morning by taking the fastest time in final practice. His lead over his rivals had diminished overnight however, with Nico Rosberg getting to within a tenth of Hamilton’s 1’22.997. Nico did end the session on a low however, with his Mercedes stalling at the end of the pit-lane prior to a practice start.

Thankfully, Nico’s car was in perfect working order for the start of the first qualifying session, with the #6 Mercedes one of the first cars out on track. His first lap was a 1’25’262, but his team-mate Hamilton was much faster with a 1’24.293; a second quicker than Rosberg who had locked up and run wide on a few occasions. Hamilton was instantaneously faster than the predicted Q1 cut-off time of a 1’24.9.

Sebastian Vettel and Ferrari hadn’t shown as good a pace as they have during the season so far in practice, but they seemed to be a bit quicker in the early stages of qualifying, with Vettel going 2nd despite an improvement by Nico Rosberg to a 1’24.8; who was now reporting that something was wrong with the balance of his car.

Red Bull had shown pace in practice and they looked to still be quite quick at the Hungaroring. Ricciardo put his Red Bull into 2nd, just 4 tenths down on Hamilton, with Kvyat placing his car in 6th. McLaren, another team who have struggled so far this year, were also looking to get into Q3 for the first time this year, with Button and Alonso going 3rd and 6th as the first runners on the soft compound tyre.

5 minutes remained in the session, with two Lotuses, Manors and Sergio Perez in the drop-zone as the clock ticked away. The entire field elected to make a second run on the faster tyre thanks to the sheer pace advantage that the faster rubber would give. This was proven by the fact that Grosjean and Hulkenberg briefly jumped to 2nd and 3rd on the time-sheets having just been in elimination. Nico Rosberg put himself on top soon after with a 1’22.9, with Hamilton soon coming through to retake P1 by 8 hundredths of a second.

McLaren were still fighting to make it out of Q1, with Fernando Alonso just pushing his team-mate out with 2 seconds to go. Jenson Button was on another lap, but it wasn’t enough to advance after his car failed to deploy it’s ERS energy boost. He would join the Sauber pair of Marcus Ericsson and Felipe Nasr and the Manor duo of Roberto Merhi and Will Stevens. 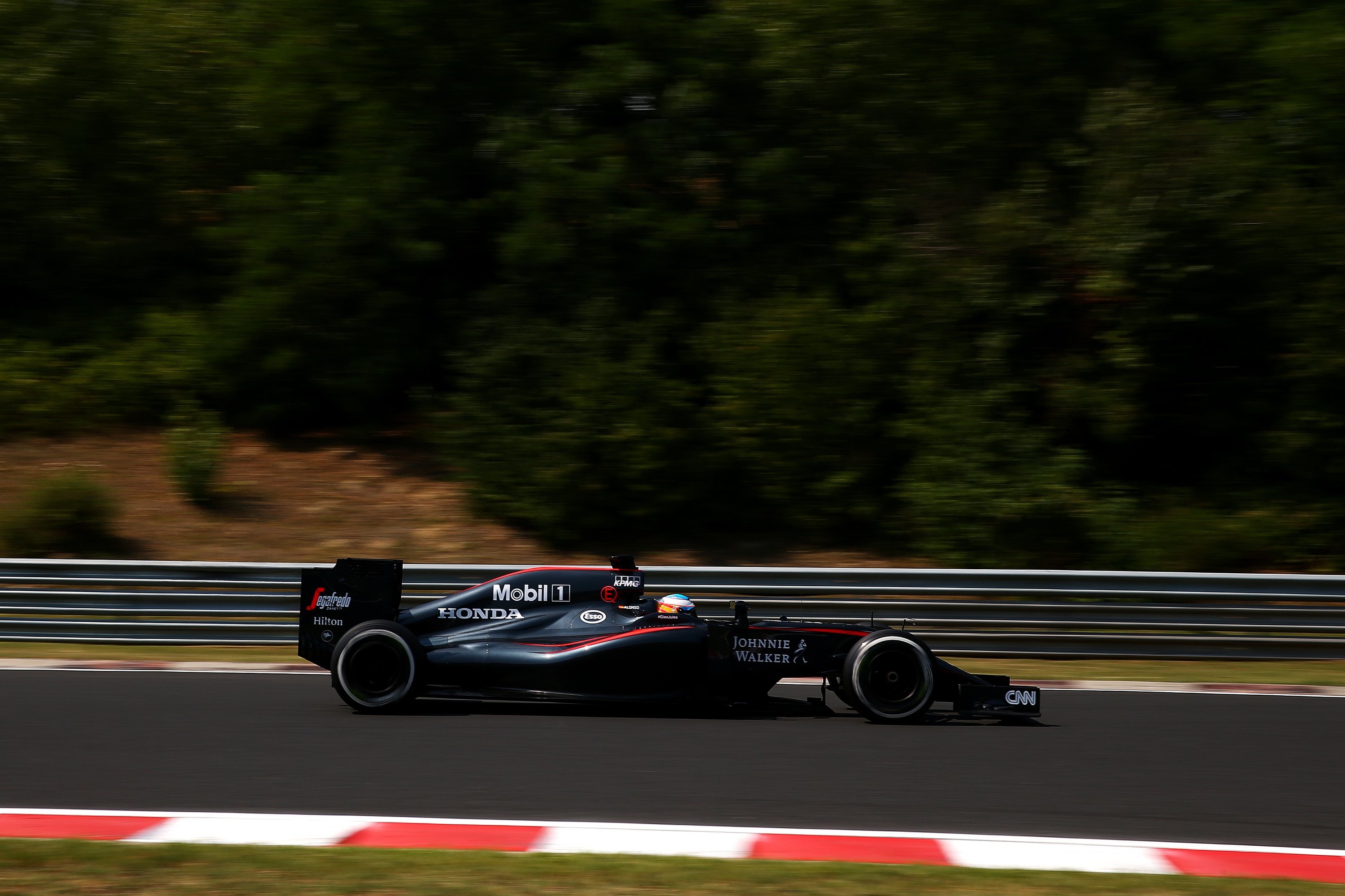 A lull in track action took place at the start of the second session, with no cars turning wheels until the 12 minute to go mark. Sebastian Vettel, Valtteri Bottas and Kimi Raikkonen, three drivers within a chance of racing with Ferrari next year, were the first to take to the track. Of the trio, it was Vettel who was be the fastest on their first laps ahead of Raikkonen and Bottas. They were soon joined by Massa who moved to third in the second Williams.

You would’ve expected that the two Mercedes drivers would soon move themselves to the top. Rosberg came through to go 3rd fastest, with Hamilton on a lap behind him. Lewis wouldn’t be able to complete the lap however, as the session was red flagged due to Fernando Alonso’s McLaren coming to a halt at pit-entry. Alonso had been fight int to try and get through to Q3. Such was his determination, he led a train of marshals to push the McLaren back into the pits so that the team could try and get the car back out in time to set a lap.

The #14 McLaren was returned to the garage just as the session restarted with 6 minutes remaining. Lewis Hamilton managed to get a lap on the board that was good enough to get him back into P1; a position that he would remain in for the rest of the session.

Sadly for Fernando Alonso, the team were not able to get his car back on track, so he would be eliminated in 15th place. He would be joined by the two Force India’s, who had two troubled practice sessions yesterday, along with Carlos Sainz and Pastor Maldonado. 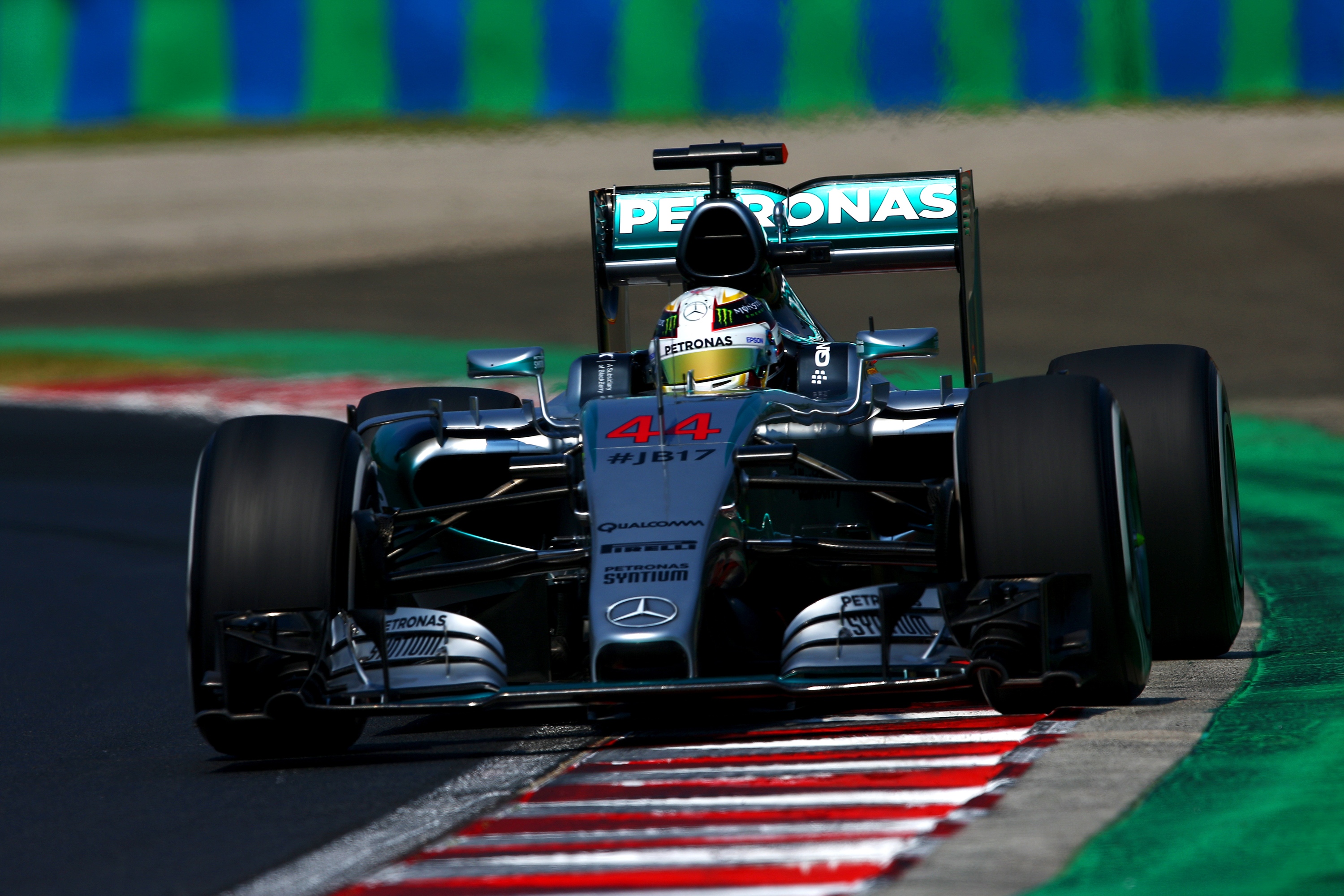 Lewis Hamilton’s hopes of getting a record 5th win in the Hungarian Grand Prix had gotten off to the best of starts, with the British driver finishing fastest in all the practice sessions and the first two sessions of qualifying. Would he be able to continue his dominance by getting pole position? Or would Nico Rosberg find a way to steal pole position from him in the final session?

Mercedes, Ferrari, Williams, Red Bull, Romain Grosjean and Max Verstappen would take part in the final 12 minutes of qualifying to decide pole position. Like in Q2, a brief period took place with no driver on track, but then all the drivers except for Max Verstappen coming out for their first of two runs.

Lewis Hamilton led the way after the first laps, with both him and his team-mate taking to the track on used tyres. Sebastian Vettel led the way in the battle for best of the rest, but he did state that he had messed up his lap a little through being ‘too greedy’. Daniel Ricciardo showed Red Bull’s pace by getting within a tenth of Vettel and would be battling with his former team-mate for supremacy on the 2nd row of the grid in the final runs.

All the drivers were on their final laps as the checkered flag came out. Rosberg matched Hamilton’s previous time in sector one, but both of them were on new tyres so Hamilton improved also. He lost a bit of time in the second sector and he then couldn’t get the time back in the final sector. This meant that he would improve, but he was not fast enough to take pole position away from his team-mate. The time was needed however, as Sebastian Vettel came through with a time that would’ve have beaten Rosberg’s previous time.

Lewis Hamilton didn’t need his final lap, but nevertheless he completed the lap which took him up to a 1’22.020. This would be pole position for the Hungarian Grand Prix. Nico Rosberg lines up alongside him in the sister Silver Arrow, with Sebastian Vettel and Daniel Ricciardo represented by just 2 hundredths of a second on the second row of the grid; Ricciardo qualifying exactly where he won from a year ago.

Finnish drivers Kimi Raikkonen and Valtteri Bottas will line up 5th and 6th on the 3rd row of the grid, with Daniil Kvyat, Felipe Massa, Max Verstappen and Romain Grosjean completing the top 10 on the grid for tomorrow’s Grand Prix.