The 2015 Formula One world championship got under-way today with the Australian Grand Prix from Albert Park, Melbourne. Reigning world champion Lewis Hamilton took the victory by over a second from team-mate Nico Rosberg in a race where the British driver simply managed the gap to take the win from pole. 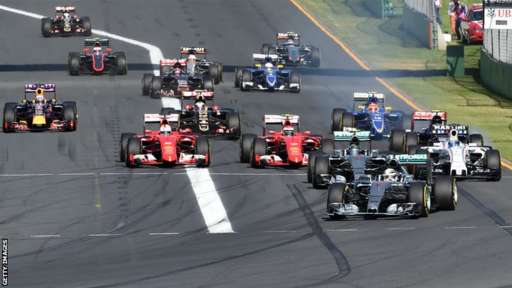 Drama unfolded before the race had even gotten under-way in Melbourne with news that Williams driver Valtteri Bottas would not race after sustaining a lower-back injury in qualifying yesterday. He was due to start 6th but failed a test by the FIA to see if he could get out of the car quickly in the event of a crash. Soon after, Daniil Kvyat and Kevin Magnussen were also confirmed to not be starting the race due to a gearbox and engine failure respectively. This, coupled with the non-qualification of the two Manor drivers, meant that only 15 drivers would start the Grand Prix; the lowest number of starters for a season-opening race since 1963.

The tally soon fell down to 14 however. Hamilton got a great start at the start of the race and won the drag race down into turn 1 ahead of team-mate Rosberg and the sole Williams of Felipe Massa. Behind them, the two Ferrari drivers got too close for comfort, forcing Raikkonen to slow suddenly mid-corner. Nasr went around his outside, but Maldonado was on the outside of the Sauber and sandwiched Nasr between him and Raikkonen. The contact sent Maldonado into a spin and then into the barrier. This bought out the safety car.

The next retirement came under the safety car, with Romain Grosjean pulling the second Lotus into the pits at the end of lap 1. The Frenchman was wheeled into the garage and subsequently into retirement.

Hamilton nailed his restart at the end of lap three and quickly built a buffer of around a second on Rosberg. Further back, Felipe Nasr got a great restart to pass fellow rookie Carlos Sainz and was now in a brilliant 5th place after qualifying 8th. Sainz was also jumped by Ricciardo who was now 6th in his home race.

With two drivers out already, the battle for last place was incredibly being fought by 12th placed Jenson Button and 13th placed Sergio Perez. The former team-mates managed to go side-by-side briefly and keep their cars clean, but it all ended soon when the pair made contact at turn 3. The Force India made a dive up the inside from a little too far back, but Jenson could’ve left more room. The contact resulted in a spin for the Mexican who had to try and catch the McLaren-Honda once again.

Rookie Nasr was putting in a great drive in his first race. He was locked in a brawl with Raikkonen and Ricciardo behind him. Raikkonen was getting frustrated as he was losing a second a lap to fourth placed Vettel as he couldn’t get by Nasr. The Ferrari team decided to gamble and make it a two stop race for the Finn by putting on another set of soft tyres to try and jump Nasr in the pits. Kimi dived in on lap 17 but the left-rear tyre wouldn’t go on in a hurry. Once the pit cycles had finished, the Finnish driver had jumped Nasr after a brace of fastest laps but would have to pit later on in the race.

During the stops, third place had changed hands between Felipe Massa and Sebastian Vettel. Vettel pitted a few laps after Massa to take the ‘best of the rest’ spot away from the Brazilian in the hopes that he could stand on the podium in his first race for Ferrari.

Kimi Raikkonen, one of the only drivers on the two-stop strategy, finally made his lap 40 with 18 laps to go. He would have been hoping for an improvement on the dismal stop first time around, but it wasn’t to be. Once again the left-rear struggled to come off of the car. All three other tyres were changed, but the front jack-man didn’t see that the left-rear hadn’t been changed, so he let Kimi go. Raikkonen got up to turn five before pulling to the inside of the circuit. Raikkonen would join Max Verstappen in retirement, who had pulled his Toro Rosso after an engine failure. The good news for Verstappen however is that he was now, officially, the youngest Formula One driver in history at 17 years and 166 days. 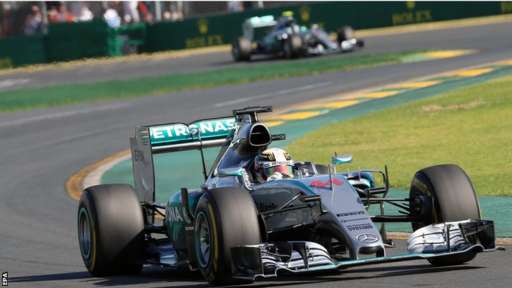 The Mercedes pair at the front traded lap-times for almost the whole race. Once moment it was Rosberg closing in, but then the pendulum would swing back to Hamilton who would pull the gap back. In the end, Rosberg was unable to catch Hamilton to repeat his win from last year, with Lewis Hamilton crossing the line to take the Australian Grand Prix victory for the first time since 2008. The Reigning champion has well and truly kicked off his title-defending year in an impressive way after taking pole position, the fastest lap and the race win.

Sebastian Vettel held on to take 3rd place for Ferrari; the first time that a driver has stood on the podium in his first race for the Scuderia since Alonso won the 2010 Bahrain Grand Prix. Vettel held off former Ferrari driver Felipe Massa by 4 seconds. One Felipe was followed by another, with Felipe Nasr taking a spectacular 5th place in his first Grand Prix in the Sauber. This week has been a troubling one for Sauber, with their driver line-up only confirmed on Saturday after Giedo van der Garde dropped his legal action against the team. Nasr was the last driver on the lead lap.

Australia’s Daniel Ricciardo will have to wait another year for the chance to get and keep a podium finish at his home race. The Australian was disqualified last year after finishing 2nd and could only manage 6th this year. He finished ahead of Nico Hulkenberg in the Force India and Marcus Ericsson; who ensured that Sauber had a double points finish after scoring absolutely nothing last year. Carlos Sainz scored points on his Grand Prix début for Toro Rosso after finishing in 9th, with Sergio Perez taking the final point paying position in 10th.

Jenson Button was the last finisher of the Grand Prix in 11th and was the only driver who finished the race who didn’t score a point. As mentioned previously, Raikkonen, Verstappen, Grosjean and Maldonado all retired during the race, with Daniil Kvyat, Kevin Magnussen and Valtteri Bottas failing to start and Will Stevens and Roberto Merhi failing to qualify.