Lewis Hamilton has claimed the 2015 Formula One world championship after winning a thrilling United States Grand Prix. In a race that saw almost as many twist and turns as all the circuits on the calendar combined, Hamilton fell in and out of championship winning conditions, with the title swinging his way in a final blow to his team-mate Nico Rosberg when he went off track with under 10 laps to go while leading.

After qualifying was delayed to the morning of race day, Nico Rosberg took pole position after Q3 was called off due to worsening rain. This meant that Q2’s finishing order set the grid, with Lewis Hamilton just a tenth of a second slower than his team-mate. 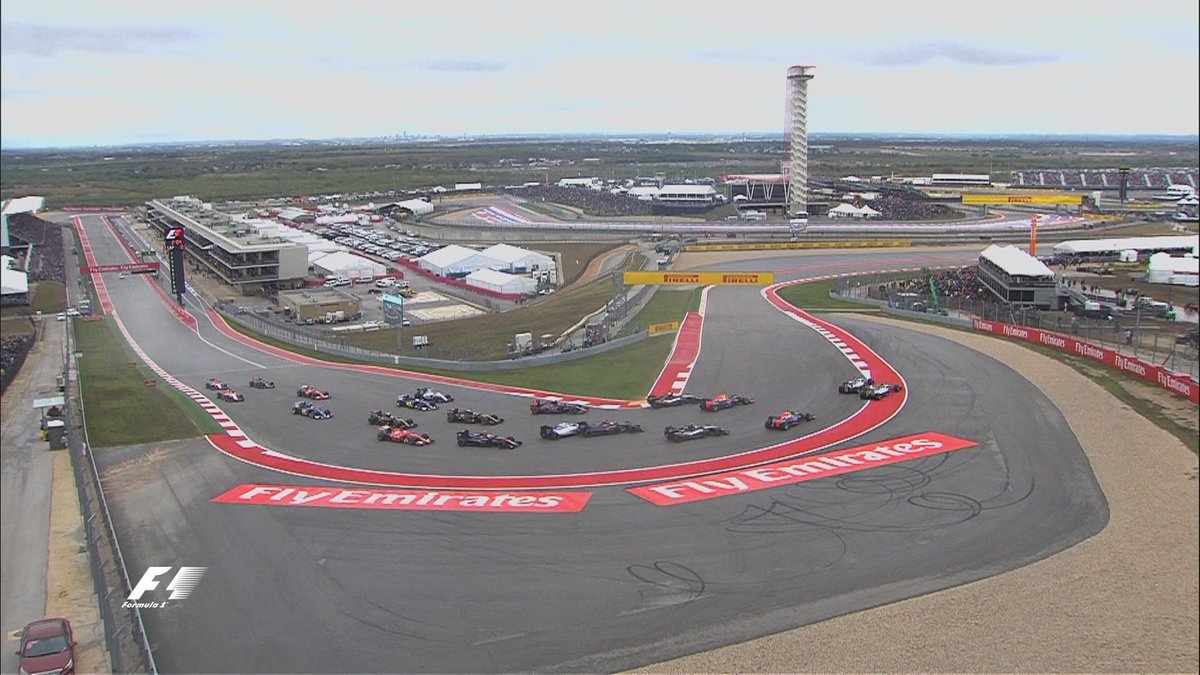 Lewis Hamilton had a chance to take his third world championship by the end of the race, so long as he outscored Vettel by 9 points and Rosberg by 2. As the lights went out, Hamilton made his intentions clear, he wasn’t going to play it safe as he went wheel-to-wheel with pole-sitter before edging him off track on the exit of turn 1. Rosberg fell down to 5th behind Perez before working his way back by to sit behind the Red Bull pair.

The two Mercedes drivers looked to struggle to get heat into their tyres initially, with Daniil Kvyat looking menacing right on the back of the race-leader Hamilton. Soon the tyres began to warm up and Lewis started to pull away, but the Russian reeled him back in yet again by lap 4 and was within DRS range. He even made a lunge for the lead at turn 1, but he went in way too deep and was re-passed by Lewis.

The first corner claimed a couple of car parts, with the front wing of Felipe Nasr scattering over the track after contact with his team-mate. This debris brought out the virtual safety car.

When the virtual safety car came back in, it was 4th placed Nico Rosberg who got the best start of all as he vaulted his way by Daniel Ricciardo, who asked the team how Nico was able to get by him so easily. Rosberg’s momentum continued onto the long back-straight as he used his Mercedes grunt to get up into 2nd place as he blitzed the Renault powered Red Bull of Kvyat.

Kvyat once again wasn’t shaken off after being passed. At the end of lap 12 the Russian once again tried a lunge, this time on Rosberg into the final corner. He got by but was too fast to make the corner as he went into the run-off. Rosberg got on the radio to complain, but he was then passed by the sister Red Bull of Ricciardo at turn 1. 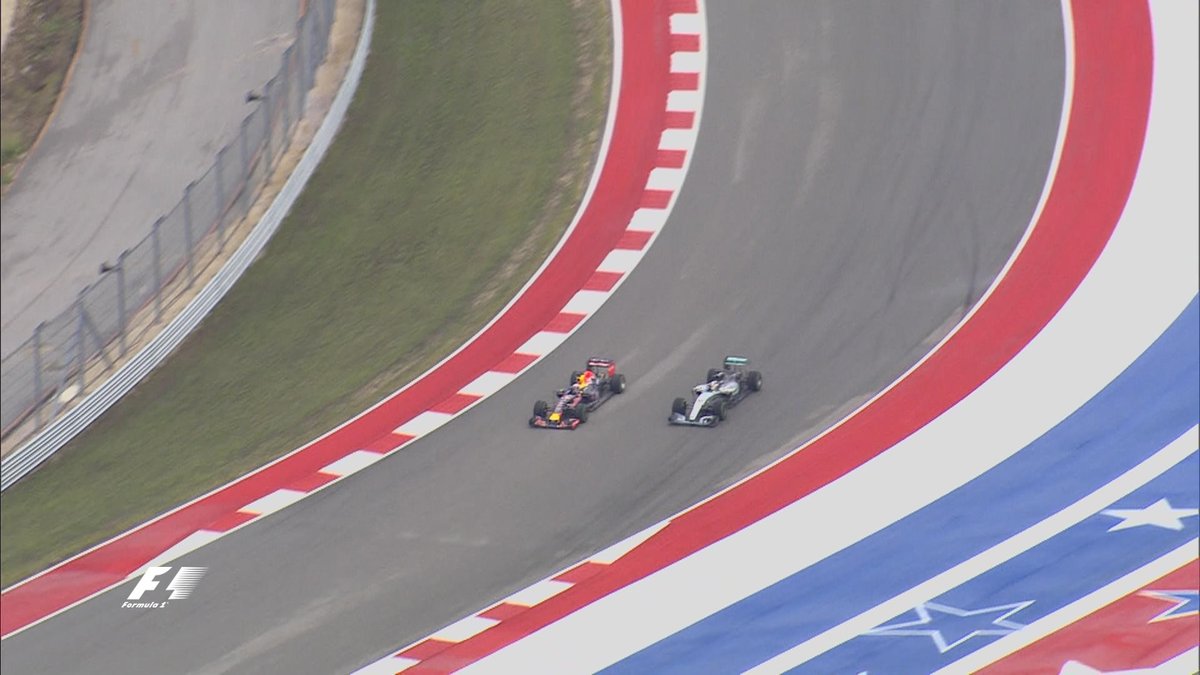 Ricciardo kept his speed up for the next lap as he set about chasing down race-leader Hamilton. He was left for dead on the straights but he seemed much faster in the corners. This was proven at the triple-apex right-hander in sector 3 as Hamilton struggled to turn in. Ricciardo capitalized and took the lead and then duly set two fastest laps in the next few laps to pull out a lead of over two seconds.

The track conditions were getting better as the race went on, with Lewis Hamilton pitting at the end of lap 18 for dry tyres. The remaining 3 leaders all pitted at the end of the next lap, with Lewis not making the ground he’d hoped for as he lost 3rd to Kvyat. Ricciardo maintained his lead out front, but not for too long as Rosberg got the wind in his sails to catch him up and pass him on lap 22. At the same time, Hamilton managed to get into 3rd ahead of Kvyat after heading off track with under-steer on numerous occasions beforehand. Kvyat soon lost another position to Sebastian Vettel, who had worked his way up from 13th to 4th at just under half race distance.

Rosberg was sprinting off into the distance, so much so that he had a lead of almost 11 seconds by the time Hamilton passed Ricciardo for 2nd place on lap 26. That lead was about to be evaporated however, as the safety car came out for Marcus Ericsson; whose car had ground to a halt at the start of the back-straight. This bunched the entire field back together. The top 3 all stayed out, but Sebastian Vettel elected to have the medium compound tyres fitted to his Ferrari; meaning that he would now be able to go until the end and everyone else would likely have to pit once more.

Nico Rosberg slowed to a crawl as the safety car came in, with the German managing to bolt away from Hamilton as the race got back going at the end of lap 32 of 56. Sebastian Vettel’s medium tyres didn’t look too shabby as he immediately took 4th from Kvyat who ran wide at turn 1. He briefly got himself into 3rd ahead of Ricciardo before the Australian sneaked back by. Vettel finally sealed the deal out of turn 1 on the next lap; with all the drivers who were going to the end looking to be in a very good position come the end of the race. 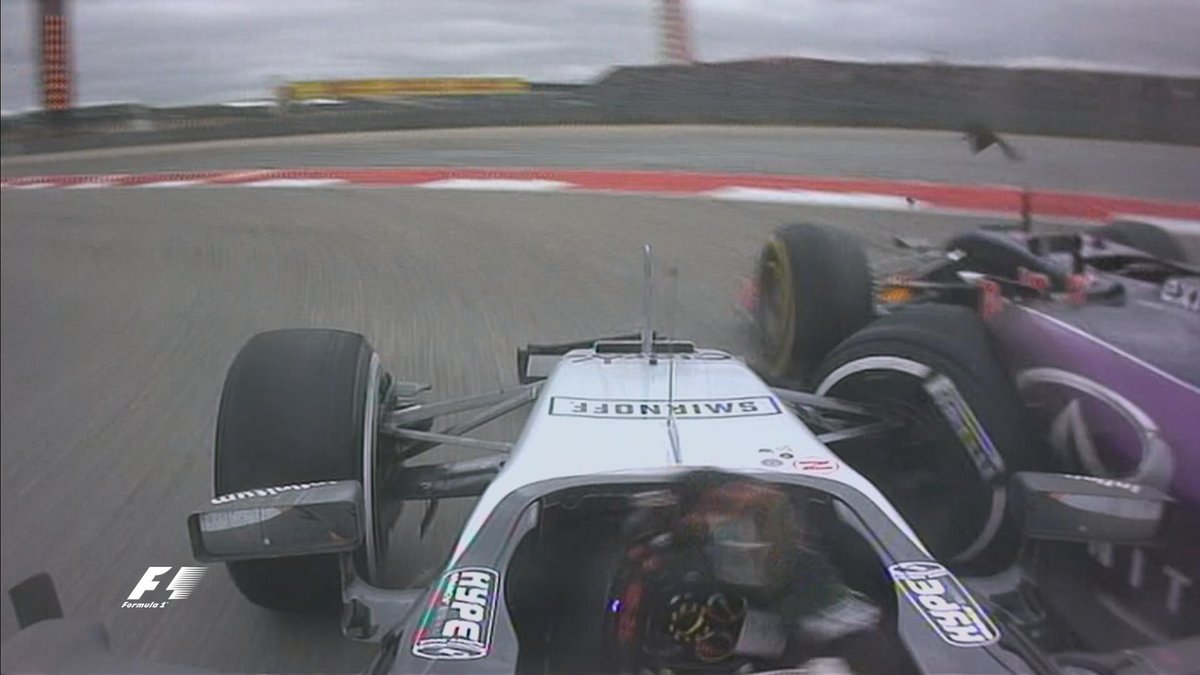 Rosberg and Hamilton were bolting off into the distance with the knowledge that they would have to pit again. The drivers who had stopped were making massive gains, except for Nico Hulkenberg however. On lap 37, Hulkenberg was trying to make gains as he attempted to pass Ricciardo at the end of the back straight. When he got to the corner however, there was no grip available for him as he slid into the side of the Red Bull. Ricciardo was able to continue, but Hulkenberg’s right-front wheel was damaged and he had to pull-over into retirement. This bought out the virtual safety car.

All the leaders but Hamilton elected to pit, which was enormously surprising considering that it seemed the absolute wrong decision for Lewis not to pit. He would now have no choice but to go to the end, with all the drivers behind set to make gains as Hamilton’s tyres wore out in the remaining few laps.

The virtual safety car ended at the end of lap 39, with Hamilton now leading ahead of his two championship rivals Vettel and Rosberg; who quickly displaced Max Verstappen from 3rd. Rosberg caught up to Vettel at a rapid rate, with the Mercedes driver taking 2nd place from his fellow countryman on lap 42 with the aid of DRS.

The race soon took another massive turn, with the safety car coming out once again after Daniil Kvyat crashed his Red Bull. The Russian ran wide onto the astro-turf at the penultimate corner, with the turf retaining a lot of moisture from the rain earlier on. This caused Kvyat to lose the car and smack into the wall on the inside. Hamilton immediately pitted and fell to 2nd, with the damage being softened due to Vettel surprisingly pitting from 3rd. His medium tyres would be much slower than the soft tyre runners around him, so he had to pit to try and take a better result in the final few laps.

The stage was set for a 10 lap sprint to the finish, with Lewis Hamilton having to overtake his team-mate to win the championship with 3 races remaining. Rosberg got a great restart as the race got back under-way, with Hamilton holding onto 2nd ahead of Max Verstappen; who had moved up into 3rd after Vettel’s pit-stop. He wouldn’t have 3rd for too long, with Vettel slip-streaming his way by on the back-straight.

Rosberg had made a great start, but it was all undone in the final sector as he lit up the rear tyres and almost spun out. He managed to keep the car pointing in the right direction, but he was slow enough for Hamilton to take the lead. This put him in championship clinching conditions should the top 3 remain in the order it was; Hamilton ahead of Rosberg and Vettel. 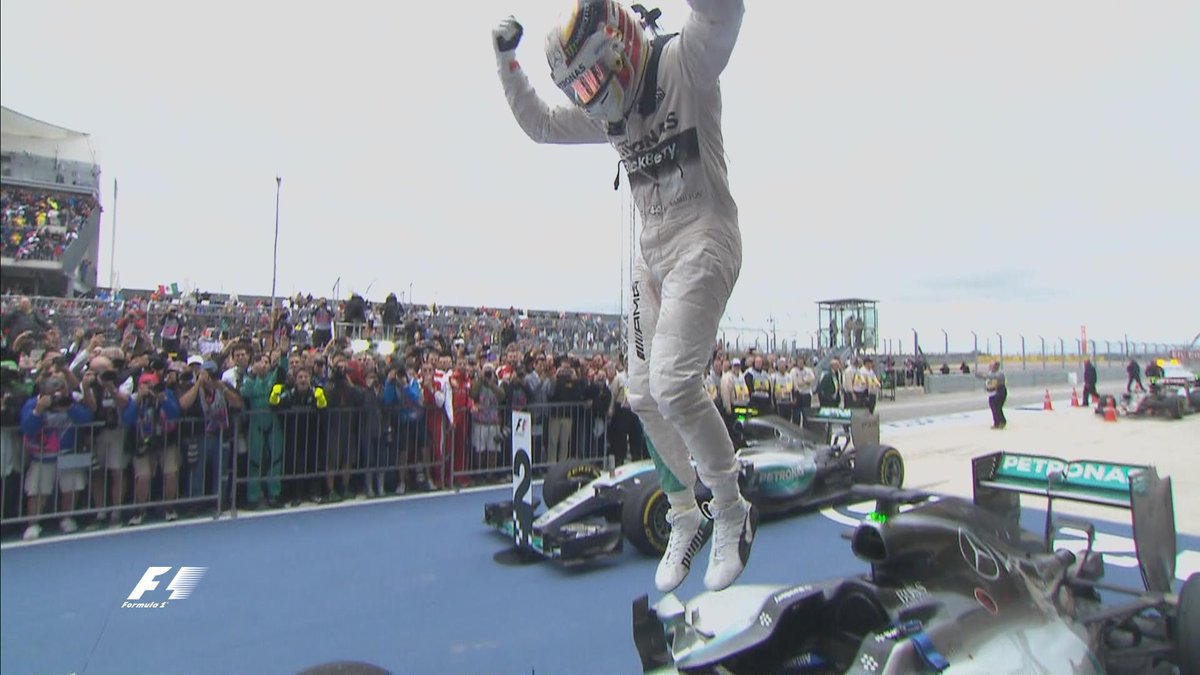 Hamilton would cross the line to take victory for the 3rd time at the Circuit of the Americas, but he would have to wait for 2nd and 3rd to cross the line to confirm his championship. Rosberg and Vettel were separated by less than a second as the lap started, but Rosberg managed to hold off the Ferrari drivers’ late assault. With Rosberg 2nd and Vettel 3rd, Hamilton had done enough to clinch himself his 3rd Formula One world championship; his childhood dream was now complete. He’d previously stated that he wanted to match his idol Ayrton Senna’s tally of three titles and now he’d done it.

7th went to Sainz, who drove all the way from last to take points; 10 of those positions being gained on the first lap. 8th and 9th would go to Maldonado and Nasr, with Daniel Ricciardo stealing the last point paying position away from Fernando Alonso on the final lap. Alexander Rossi was just two places shy of the points in his first home race, with 12th place equaling Manor’s best finish of the year.

8 drivers failed to finish the race, with the slippery surface and tight battles claiming the cars of Kvyat, Hulkenberg, Ericsson, Raikkonen, Massa, Grosjean, Bottas and Stevens.

The emotion was apparent in the pre-podium room, with Lewis Hamilton visibly moved by his accomplishment. Equally, the disappointment on Rosberg’s face was obvious. He initially congratulated his team-mate, before seemingly turning angry when Lewis threw him the 2nd place finishers hat; with Nico angrily throwing the hat back at him. This, if nothing else, shows the raw emotion that comes hand-in-hand with competition; especially in Formula One.