Nico Rosberg has won the 2015 Mexican Grand Prix ahead of team-mate Lewis Hamilton; with the German driver putting in a great performance to hold off several challenges from his champion team-mate. Valtteri Bottas took the final spot on the podium despite being involved in a collision with Kimi Raikkonen; who retired from the race along with his team-mate Sebastian Vettel.

Nico Rosberg grabbed his 4th consecutive pole position in qualifying ahead of his team-mate and he used it to his advantage on the run down into turn 1 as he held the lead ahead of his team-mate; he ended his poor streak of losing the lead early during the last few races. 3rd place man Sebastian Vettel soon came to grief at turn 1, with contact between him and former team-mate Daniel Ricciardo earning the Ferrari driver a puncture; dropping him all the way to the back of the field.

The order remained largely the same for the first few laps, with the only massive gains coming from Kimi Raikkonen, who had gotten up to 12th within the first 10 laps. Soon, the order began to mix up, with some drivers making their first pit-stops by lap 10.

Bottas and Massa were among the first to pit, with many complaining about losing rear-end grip. The race simulations seemed to suggest that either a 1 stop or a 2 stop race was possible; with both yielding the same theoretical race finish time. The early stoppers were almost certainly committed to a 2 stop strategy, with drivers such as Rosberg, Hamilton, Kvyat, Ricciardo, Perez and more all favoring a longer first stint to try and only pit once.

The battle at the front was rather stagnant to start, with both Mercedes drivers pulling away from the rest of the field whilst maintaining the gap between each other as they traded fastest laps.

Further back, Sebastian Vettel was trying to make his way back through the field after his turn 1 shenanigans. He was nearing the top 10 as he passed Carlos Sainz and Jenson Button, but he soon fell back down many more positions after losing control of his Ferrari in the middle sector. It looked as though Vettel was having problems with his braking, with a flat-spotted front left tyre now also hurting him thanks to his spin. 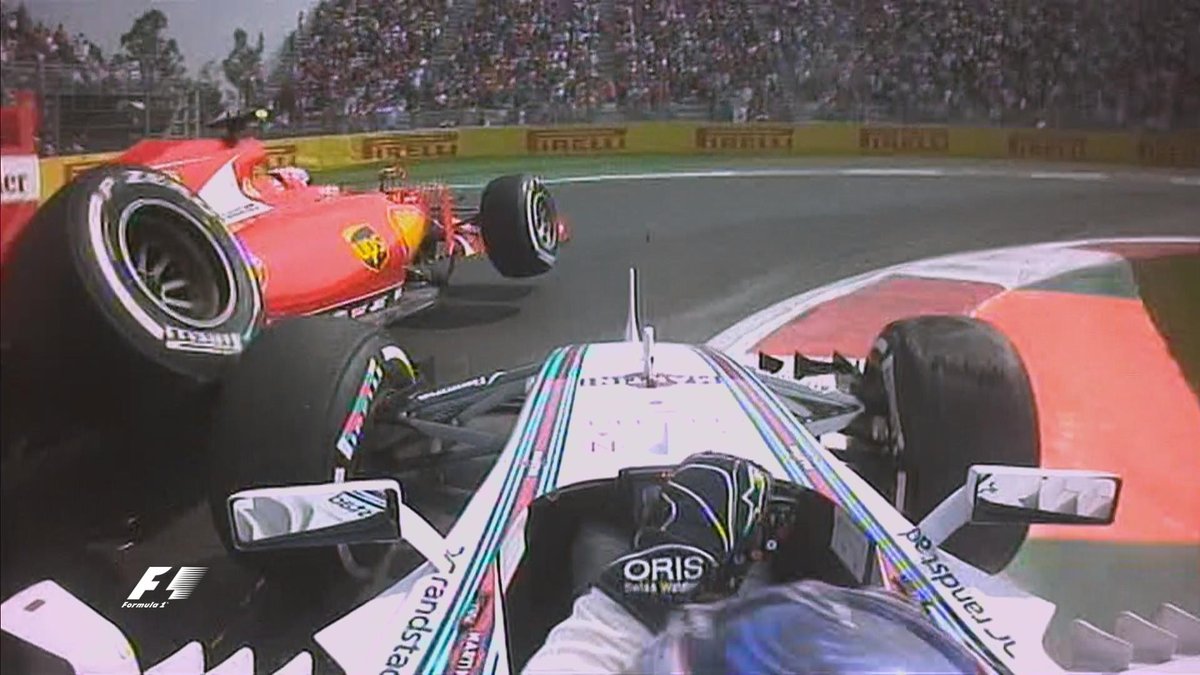 The other Ferrari was also hitting strife, with Kimi Raikkonen’s race coming to a sudden conclusion whilst fighting with Valtteri Bottas. The pair came together 2 races ago in Russia on the final lap, with contact coming once again in the first sector as they went side-by-side at turns 4 and 5. Bottas was trying to get up the inside into turn 5, but he felt that there wasn’t enough space given by Raikkonen which resulted in contact; breaking the right-rear of Kimi’s car.

Soon after, the race-leading drivers on the one stop strategy made their return to the pits; with Nico Rosberg pitting first followed by his team-mate 2 laps later. Hamilton emerged a fair few seconds behind his team-mate, but the gap was soon trimmed size-ably after a string of fastest laps for the British driver. He soon started to calm his lap-times down again, but there was very much a sense that Hamilton had the pace to catch at his disposal when he should decide to charge.

The lead fight was slightly interrupted just after half distance by Sebastian Vettel. The German made a 2nd pit-stop after his tyres continued to worsen due to his earlier spin. He exited the pits right in the middle of Rosberg and Hamilton. He looked to have the pace to run with the Silver Arrows, but he was soon asked to move out of the way of Hamilton as he wasn’t making any gains to Rosberg.

The race took an unexpected turn after Nico Rosberg suddenly stopped for a 2nd time on lap 47. The team then asked Lewis Hamilton to pit soon after, with the new champion questioning the decision on the radio. The team claimed that the tyres would soon be completely worn, despite only having been on the tyres for around 21 laps as opposed to the predicted life of 50 laps before the race. Lewis continued to doubt the team even after submitting and pitting. 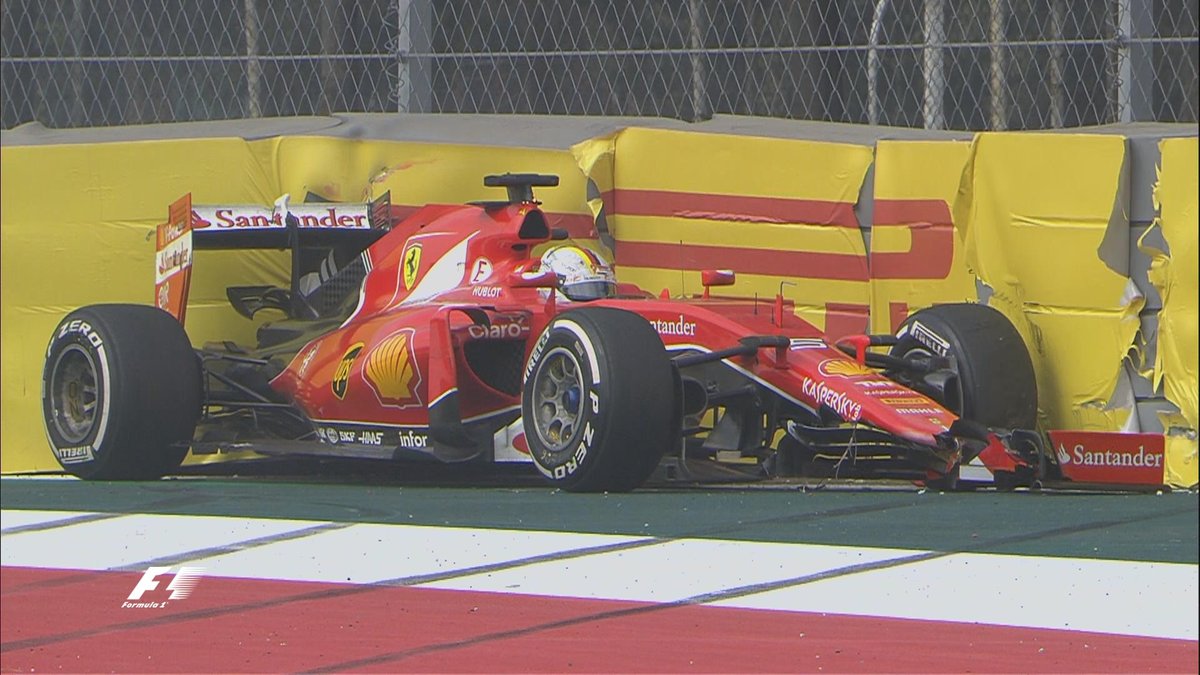 The race took another lurch in another direction just after that, with Sebastian Vettel once gain struggling in the middle sector as he locked up and hit the wall. This would cause him to retire instantly from the race; meaning that this was the first time since the 2006 Australian Grand Prix that neither Ferrari finished a race. The safety car would come out whilst the marshals collected the stricken Ferrari.

A number of drivers stopped under the safety car, with Mercedes electing to stay out after their recent stop. As a result, a number of drivers behind them now had slightly better tyres, including Kvyat, Ricciardo, Bottas and Massa.

Hamilton was right on the back of his team-mate as the safety car came in on lap 58 , but Rosberg still managed to hold the lead down the long start/finish straight. Bottas used his Mercedes engine to blast his way past Kvyat to take 3rd place, but he was too far behind to challenge Lewis Hamilton for 2nd. The Mercedes soon started to pull away from the pack once more, with Rosberg opening up a gap of just over a second on his team-mate.

The gap soon started to come down between the Mercedes team-mates, with Hamilton drawing tantalizingly close to getting within DRS detection of his team-mate before making a mistake and falling back by almost a second in the middle sector. He soon tried to make up for his mistake by drawing back in toward his team-mate, with the gap coming back down to 1.2 seconds with 5 laps remaining. Sadly for him however, he seemed to stumble once again and lose time with 2 laps to go, with the gap just too much for him to bridge to catch his team-mate.

Nico Rosberg hadn’t won a race since the Austrian Grand Prix back in May, but he ended his drought by taking his 4th win of the season; a win that would put him back into 2nd place in the championship standings ahead of his rival Sebastian Vettel who didn’t finish the race.

3rd went to Valtteri Bottas, who survived the contact with his fellow countryman Kimi Raikkonen to take the last step on the fantastic podium in stadium section of the circuit. He overtook the Red Bull of Kvyat on the last safety car restart, with Kvyat taking 4th ahead of his team-mate Ricciardo.

6th went to Felipe Massa ahead of Nico Hulkenberg and home hero Sergio Perez; who was met with masses of applause after an exciting drive with a number of overtakes. Completing the top 10 was Max Verstappen in 9th, with Romain Grosjean fending off a late charge by team-mate Pastor Maldonado take take the final point in 10th.

Formula One: Silver Arrows duo fastest in Brazilian Friday practiceFormula1, Sport News, Sport Sponsorship, Sports Marketing
At RTR Sports Marketing we use cookies to bring you the best site we can. If you're cool with that, click OK. Or to find out more, read our Cookie Policy.OkCookie policy