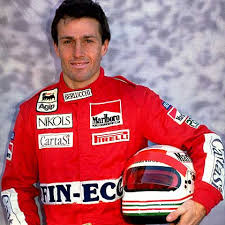 Former Formula One driver Andrea de Cesaris has passed away today following a motorcycle crash in Italy. The Italian raced in Formula One from 1980 until 1994 for teams such as Alfa Romeo, McLaren, Ligier, Minardi, Brabham, Rial, Scuderia Italia, Jordan, Tyrell and Sauber. He was just 55 years old.

During 214 races, Andrea scored 5 podiums, 1 pole position, 1 fastest lap but no victories. This makes him the driver with the most amount of race entries without a race win. He was affectionately known as ‘Andrea de Crasheris’ due to a phase of his career where he would crash more than any other driver. During his 1981 season for example, he finished 6 out of 14 races, crashing the car 18 times. Despite this he was highly regarded as a very quick driver; he scored points for 9 out of the 10 teams he raced for. It is thought by some that he may have even taken a win in the 1991 Belgian Grand Prix had it not been for a mechanical failure.

Andrea De Cesaris will be missed.

Formula One: Marussia confirm Bianchi suffered diffuse axonal injury.Formula1, Sport News, Sport Sponsorship, Sports Marketing
At RTR Sports Marketing we use cookies to bring you the best site we can. If you're cool with that, click OK. Or to find out more, read our Cookie Policy.OkCookie policy