Nico Rosberg has taken pole position for the 2015 Mexican Grand Prix, with team-mate and 2015 champion Lewis Hamilton 2 tenths adrift in 2nd place. Sebastian Vettel and the Red Bull drivers weren’t too far behind at the end of the session; with all 3 looking to challenge the Mercedes drivers tomorrow. 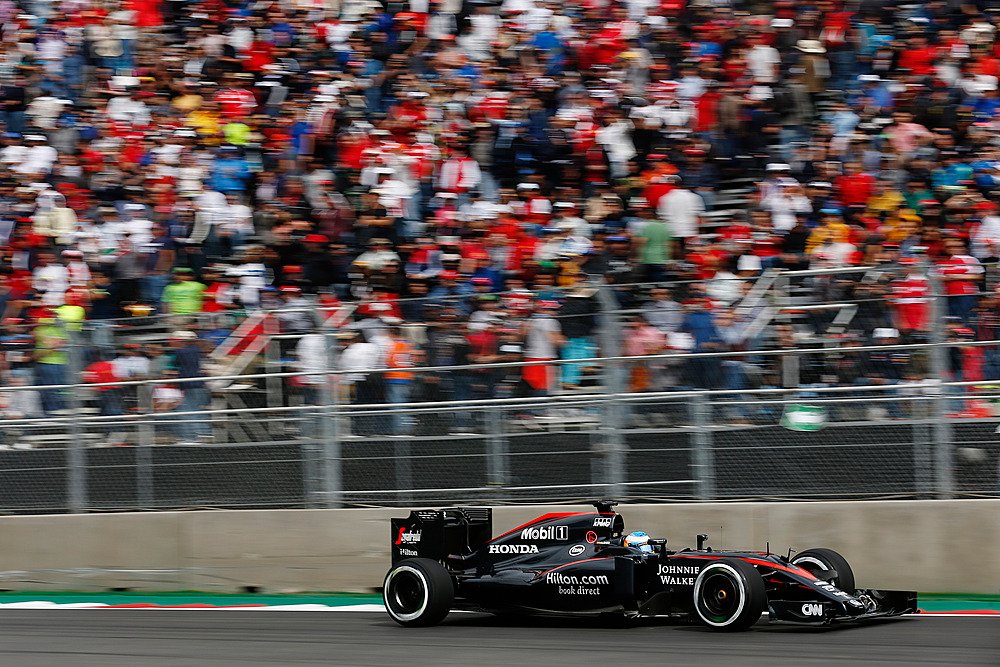 Mercedes were 1-2 in final practice on Saturday morning prior to qualifying; with Nico Rosberg and Lewis Hamilton separated by just 14 thousandths of a second. Their rivals weren’t far behind however, with the top 12 all within a second of each-other.

The track conditions would be vital in qualifying, with the circuit catching out many drivers throughout the event so far. Weather also had the potential to be a factor, with rain being a possibility to hit at some point during the session.

One man who wouldn’t head out onto the circuit for Q1 was Jenson Button, with the team electing not to run the #22 McLaren Honda after a return of their awful technical gremlins in third practice.

Valtteri Bottas was an early leader in the session ahead of Verstappen and home-hero Sergio Perez; who was met with thunderous applause and cheers every time he circulated the track.

Soon the Mercedes drivers put themselves back on top, with Hamilton faster than Rosberg by 2 tenths after their first laps. The strategy for qualifying seemed to be that multiple laps on one tyre would yield better results. This started straight away, with Rosberg going faster on his 2nd consecutive lap, with Hamilton electing to have a cooling lap in between 2 flying laps; this put him back on top again as he became the first driver to get under 1’21 this weekend.

Drivers soon started heading out on the faster soft tyre compound, with Sebastian Vettel leaping up into P1 with just over 5 minutes to go. The 4 drivers in the elimination zone all put on the faster rubber to try and get themselves into Q2; with both Fernando Alonso and Felipe Nasr unable to improve on their first laps. In the end, neither would lift themselves out of the drop-zone; with the two Manor drivers joining them and the non-running Jenson Button in elimination.

With the times looking close throughout the field, Q2 had the potential to see some major scalps should anyone make a mistake. All the drivers headed out onto the track with the soft tyre compound, with Max Verstappen the first to set a lap-time. His 1’21.1 was soon eclipsed by a whole second as Hamilton came through to finish his first lap. Lewis’ second lap was enough to get him a 1’19.8; the first sub 1’20 lap-time on the new Autodromo Hermanos Rodriguez. Rosberg’s first lap put him 2 tenths adrift.

Red Bull continued to show the decent pace they had in practice, with Daniil Kvyat and Daniel Ricciardo 3rd and 4th after their first runs; both within a second of Hamilton. Sebastian Vettel soon threw his name into the mix as he put himself 2nd fastest as he split the two Mercedes.

The first major scalp of the session came in the form of Kimi Raikkonen. The Ferrari team had worked wonders to get his car ready for qualifying after it stopped out on track in FP3, but the Finn would advance no further than 15th. He was out of the car long before the end of the session and to make matter worse, he would also receive a 5 place grid penalty that would drop him even further down.

Joining Kimi in elimination would be the two Lotuses of Grosjean and Maldonado, with Sainz and Ericsson also dropping out. Verstappen and Massa had both been in the elimination zone in the final minute of the session, but two late impressive laps put them through into the top 10 shoot-out. These laps were even more impressive given the fact that rain was starting to fall on circuit, with Verstappen in particular sliding his way around the final corner.

With drops of rain starting to fall at the end of Q2, many drivers began to queue at the end of the pit-lane to get laps in as quickly as possible. Lewis Hamilton and Nico Rosberg headed the queue, with the track not looking too wet. It was a case of the teams and drivers not taking any chances just in case the conditions worsened.

Rosberg drew first blood over his team-mate, with Hamilton suffering a scrappy end to the lap after locking up in the stadium section. The drivers went onto the 2nd flying laps immediately, with Hamilton putting himself ahead of Rosberg by 22 thousandths before Rosberg put himself in P1 once again by a tenth. Vettel kept the Silver Arrows drivers honest in his Ferrari as he got within 4 tenths of Rosberg in 3rd place.

The drivers emerged for their final laps in qualifying with just over 3 minutes remaining, with Daniel Ricciardo, Nico Hulkenberg and Sergio Perez leaving it until the closing stages to set a lap-time. Ricciardo put himself 5th on his first effort, with his time just 1 thousandth slower than his team-mate Kvyat.

Most of the drivers used their first flying laps to prepare for their second and final laps. Lewis Hamilton had it all to do if he wanted to snatch Nico Rosberg’s 4th consecutive pole position away, but he couldn’t do it. The track conditions had seemed to change all of a sudden, which was denying everyone the chance to improve. This would mean that Nico Rosberg would take pole position for the 2015 Mexican Grand Prix, with Hamilton making it a front-row lock-out for the 13th time this season.

3rd on the grid would go to Sebastian Vettel, with the two Red Bull drivers not too far behind in 4th and 5th. Vettel, Kvyat and Ricciardo could put themselves in contention during the race tomorrow as they had done last week in the United States.

Williams team-mate Bottas and Massa took 6th and 7th; with neither driver able to make it 3 pole positions in a row for the team at the Autodromo Hermanos Rodriguez; despite it having been a 23 year gap between now and the last qualifying session.

Max Verstappen put himself 8th on the grid, with the Force India drivers completing the top 10. Sergio Perez was unable to put his car as high up in the top 10 as he would have liked to in front of his home crowd; but he will surely try his best to delight the crowd tomorrow having shown good pace so far this weekend.