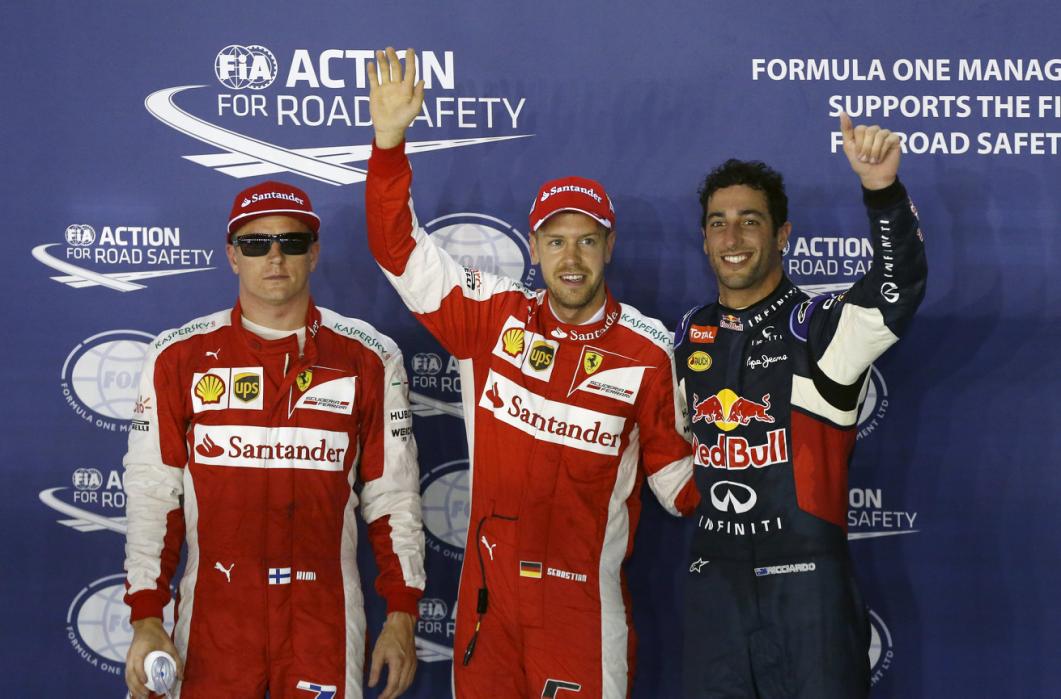 Sebastian Vettel has taken pole position for the 2015 Singapore Grand Prix. The German secured Ferrari’s first pole position in three years, ending Mercedes’ stranglehold over the front of the grid so far this year. In fact, the Mercedes duo didn’t feature on the first 2 rows of the grid after being summarily off the pace in 5th and 6th.

Sebastian Vettel looked fast enough to take pole right from the start of the session, with his only real challenge looking to come from his former team-mate Daniel Ricciardo; who’s hopes of pole position were thwarted by the Williams of Valtteri Bottas, who forced Ricciardo to back off before his final flying lap began. In the end, Ricciardo had to settle for 2nd; which nevertheless was a great performance by the Australian. He ended up half a second slower than Sebastian.

The great performances by Ferrari and Red Bull were underlined by the second row; with Kimi Raikkonen and Daniil Kvyat putting themselves ahead of the Mercedes drivers. The result was particularly sweet for Red Bull given the current uncertainty of their 2016 campaign in terms of engine supplier and overall involvement of the team.

The Mercedes drivers locked out the 3rd row of the grid, with Lewis Hamilton 5th ahead of Nico Rosberg in 6th. Unlike some other rare poor qualifications for Mercedes over the last two seasons, there was no excuse for their poor pace. They ended the final session a second and a half slower than the pole position time from Vettel.

Williams put aside their less than satisfactory pace from practice to get both of their drivers in the top 10. Valtteri Bottas put his #77 car in 7th ahead of team-mate Felipe Massa in 9th. Max Verstappen split the pair on his first visit to Singapore after qualifying 8th. His team-mate Carlos Sainz was only 14th after tagging the wall and damaging his rear-wing and suspension in Q2. Completing the top 10 was Romain Grosjean for Lotus. The Frenchman made it all the way to Q3 as opposed to his team-mate Pastor Maldonado who was eliminated in the first session in 18th.

McLaren finished qualifying slightly disappointed after having outlined Singapore as one of their best chances for a good result. Both Fernando Alonso and Jenson Button made it out of Q1 but didn’t advance any further; with the pair lining up 12th and 15th respectively. Alexander Rossi couldn’t beat his team-mate

Will Stevens in his first ever Formula One qualifying session. He wasn’t too far off though as he qualified just half a second slower in last place.