Formula One: Teen Verstappen signed to Toro Rosso for 2015! 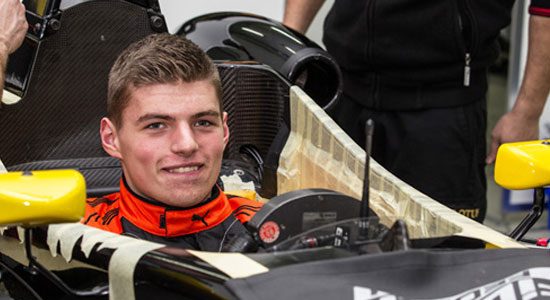 Max Verstappen, son of former F1 driver Jos Verstappen and current rising star in single-seater racing, is set to become the youngest Formula One driver ever after being signed by Toro Rosso to race for them in next year’s championship.

Verstappen was signed to the Red Bull young drive programme last year and will partner Daniil Kvyat; who was promoted to a race seat in a similarly surprising manor after graduating from the programme himself.

Verstappen’s promotion has taken many by surprise given the 16 year old’s lack of experience. Max is in only his 1st year of single seater racing and has taken part in just 40 races since graduating from Kart racing.  Questions of inexperience may be countered by the example of Kimi Raikkonen, who only took part in 23 single seater races before making it to Formula One.

His short racing career has been an impressive one so far, with Max taking 6 consecutive race wins earlier this year in the Formula Three championship. Before that, he made a name for himself in karts, become the European and World KZ karting champion.

His surprise promotion means that he has leaped ahead of drivers like Carlos Sainz Jnr, who has been in the programme for a lot longer. Toro Rosso team principal dispelled any thoughts that the teenager would be disadvantaged a result of his comparatively short career:

“[We] consider Max to be as one of the most skilled young drivers of the new generation and we believe he has the necessary maturity and mental strength to take on this challenge successfully”.

“Bearing in mind that Scuderia Toro Rosso was created with the aim of bringing young talent from the Red Bull Junior Team into Formula One and to educate them,” Tost added, “it will now be up to us to provide Max with a competitive car, which will enable him to have the best possible start to his Formula One career”.

Max will replace Jean-Eric Vergne, who will have to search for a new seat in Formula One after racing for the Italian team since 2012. The Frenchman has had a best finish of 6th place at last year’s Canadian Grand Prix. Tost showed his appreciation to Vergne saying:  “He has produced strong performances, but unfortunately he was also hindered by some reliability problems, especially in the first half of the current season.”

Verstappen will be hoping to emulate the performances by Red Bull driver programme graduates such as Sebastian Vettel and Daniel Ricciardo, both of whom have produced excellent drives in the past year’s of Formula One.

“I would like to thank Dr Helmut Marko and Red Bull for all their trust and giving me the chance to make my Formula debut in 2015 with Scuderia Toro Rosso,” he said. “Ever since I was seven years old, Formula One has been my career goal, so this opportunity is truly a dream come true,” he said,

“There are several people that have helped me throughout the years and still support me to this day and I want to sincerely thank them. First of all a big thanks to my father Jos, who has always been by my side, day and night, year after year.”

His father also made an early debut into Formula One in 1994 for Benetton alongside Michael Schumacher. Jos picked up 2 podiums in that year and went on to race for 5 more teams in 103 starts.

Max already qualifies for the mandatory FIA super-license due to his participation in the Formula Three championship where he is second in the standings. Upon his F1 debut in next year’s Australian Grand Prix, he will eclipse Jaime Alguersauri’s record as youngest F1 driver at 19 years old as he will only be 17.

Formula One: Le Mans ace Lotterer to make F1 debut in Belgium!Formula1, Sport News, Sport Sponsorship, Sports Marketing
At RTR Sports Marketing we use cookies to bring you the best site we can. If you're cool with that, click OK. Or to find out more, read our Cookie Policy.OkCookie policy