Movistar Yamaha MotoGP’s Maverick Viñales ended the Gran Premio d’Italia Oakley today with a strong performance. Vinales held firm at the front of the field to earn a second place, his fourth podium of the season over six races. His still recovering teammate Valentino Rossi had the passionate Italian crowds at the Autodromo del Mugello in a frenzy as he battled at the front of the field. He finished the race in fourth position. 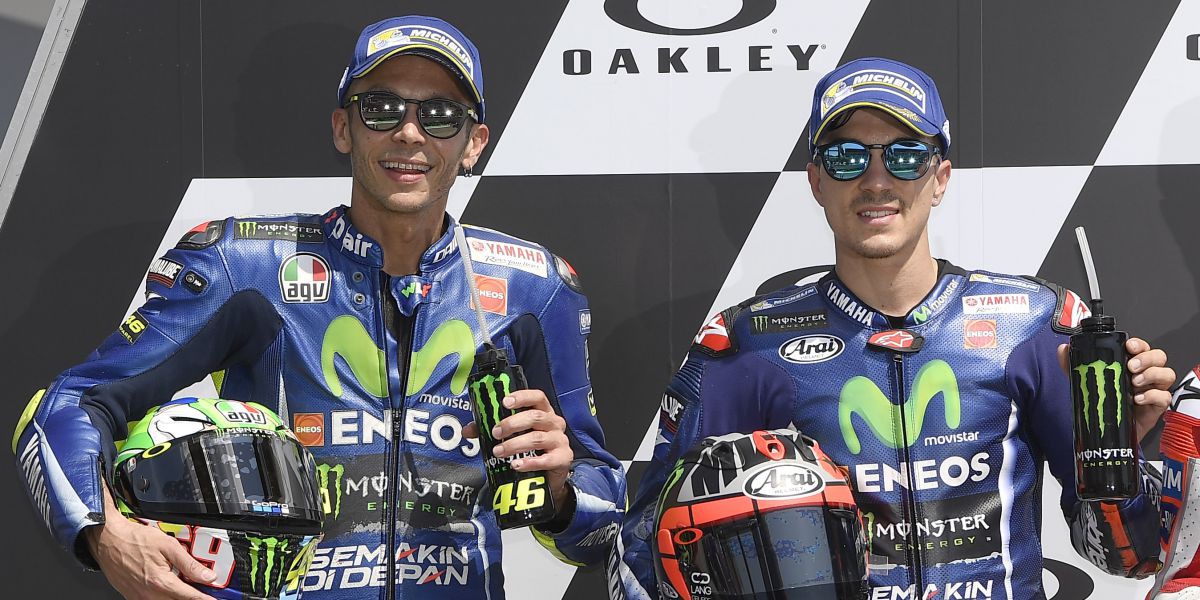 Viñales had a good start from pole and slotted in behind his fellow Movistar Yamaha rider. After a few tussles with various rivals in the opening stages, he hit the front of the field on lap four and put his head down to get a bit of daylight between him and the chasing riders. Though he was unable to completely break away, he held on to the lead for ten laps, after which he had to let Andrea Dovizioso pass.

Small mistakes in turn 15 on lap 15 and in turn one on lap 17 caused the young contender to lose some time and he found himself in third place. However, Viñales refused to give up the fight and, with four laps to go, he took back second position and was on the hunt for Dovizioso, 1.215s ahead of him. He shaved off some time in the last few laps, but decided to abort his mission on the home stretch. He crossed the line in second place, 1.281s from first, scoring valuable points for the championship.

Starting from second on the grid, Rossi had the air horns blare in the crowd as he dashed past his teammate to take the holeshot. He was joined at the front by Jorge Lorenzo, Viñales and Dovizioso. The heart rates of VR46 fans all around the world went through the roof on the opening laps, as the Doctor battled with the challenging riders. The order changed constantly, until a front group, consisting of four riders, started to form after lap seven.

While the Mugello Circuit got swamped in yellow smoke, Rossi bravely held on to third place for eight laps, until Danilo Petrucci passed him on lap 14, just when the Doctor was lining up Viñales. The nine times World Champion was initially up for the challenge to regain his position, but with his body still sore from his motocross accident, he wisely decided to bring home his YZR-M1 for a fourth-place finish. He took the chequered flag 3.685s from the front.

Viñales’ second place earns him 20 points. He maintains the lead in the championship standings with a 105-point total, 30 points ahead of Rossi in third place. The Movistar Yamaha MotoGP Team also hold the lead in the Team standings by 44 points, with a total of 180 points, whilst Yamaha remains the top manufacturer in the Constructor’s Championship by a 23-point margin, with 128 points.

The MotoGP paddock will now travel to Spain for the Gran Premi Monster Energy de Catalunya, held next weekend at the Circuit de Barcelona-Catalunya.

It has not been a very easy weekend, but after yesterday‘s qualifying we were quite confident of our performance. Today‘s race started well with Maverick and Valentino battling at the front of the field for the lead in a group of four to five riders who all maintained a similar pace. When Maverick understood that chasing the rider in first position was too risky, he decided to take home some very important points for the championship, rather than make a mistake. Knowing Valentino‘s condition when he arrived here, he rode a really great race. He was on the limit of his physical abilities today, so his fourth place is a big achievement, but in my opinion he deserved a podium, considering the effort that he put in. We will now head straight to Catalunya for the next round of the ch ampionship, where we look forward to another thrilling weekend of racing.

Honestly, I‘m so happy and pleased, because today was a day to stay on the bike. When I saw Valentino fall back and with Marc not being there at the front, I thought “OK today is the day to take second place and bring home a lot of points”, which is really important after the crash on Friday. Being on the bike was already very lucky, because it was a fast crash and my arm was hurting a lot, so I‘m very pleased for today‘s result. I was only feeling pain when the bike was moving but for most of the race I was feeling really good, I was at 100%. I was, as always, preparing to push on the last five laps and make my best rhythm of the race, but like I said, today was a good day to stay on the bike.

I knew that today‘s race would be more difficult than usual for me. While on the bike I rode well and I didn’t have pain, but I was struggling a bit and I knew that 23 laps would be long and hard. I tried my best, I did a perfect start and I led the race for some laps, but I couldn’t really ride the way I would have liked to. At the end I tried to stay close to the riders in front, but I did not have the power to attack Danilo. I would have liked a lot to be on the podium today, but there was nothing I could do. It‘s a bit disappointing that I’m not on the podium at Mugello, but seeing where I was few days ago, and the big hit I took, it‘s been a positive weekend all in all. Being here and riding in front of so many fans was a “gift”. Now we have just few days before Catalun ya, another important race, so I will try to recover and be in perfect shape in Barcelona.