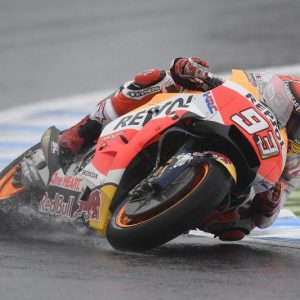 The two free practice sessions of the Japanese Grand Prix’s opening day were characterized by steady rain and cool temperatures, but Repsol Honda’s Marc Marquez showed a great pace from the beginning of the action.

Marc was fastest in the FP1 session and was pushing hard during FP2 after fitting a new rear tyre when he suffered a high-side at turn 4, causing him to miss the last minutes of the session. Nonetheless, the time he had already set was fast enough to place him second on the day, a mere 0.043” off provisional pole-setter Andrea Dovizioso.

After ending the first stint in 20th place because he was struggling with a lack of grip, Dani Pedrosa found a better rhythm in the afternoon and ultimately closed the day in eighth place, less than a second off the top.

“This morning everything was perfect and I felt very, very good on the bike. That was the case until the last exit of FP2, despite having to go back from a change to the setup that hadn’t work as well as we hoped. At the end of the session we fit a new set of tyres and I had a different feeling, less grip. I suffered a high-side, which is a bit uncommon in MotoGP now, but in the end, I’m fine. We need to check for why it happened, and we can certainly work a bit on the electronics to understand how to improve that side. Anyway, our speed was there and our lap times came out good, so our mentality will remain the same. I feel confident for the weekend.”

“This morning was very tough as we struggled to put heat into the tyres and I had no grip at all. In the afternoon we modified the setup, aiming to cope with these cold temperatures, and we improved a little bit but not enough yet. I’m still feeling uncomfortable on the bike due to the lack of grip. We had a softer tyre spec available, but looking at the forecast, we expect more rain to come. We preferred to continue with the tyre configuration that we think can last the race, looking to understand how to make them work better for us.”