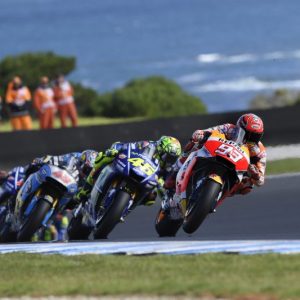 Today Marc Marquez put on a stellar performance to secure a crucial victory at the Australian Grand Prix, the 61st win of his career, his 35th in MotoGP, and his sixth this year.

The performance extended his Championship lead to 269 points, 33 ahead Andrea Dovizioso, who remains his only rival for the Title.

Marc was aware that today he had a chance that was too good to miss, on a circuit he loves. However, he had to face an incredibly close, race-long battle in an eight-rider leading group formed by Marquez, Rossi, Viñales, Zarco, Iannone, Miller, Crutchlow, and Rins, fighting hard and constantly swapping positions from the start to two thirds of race distance.

Marc waited for his moment before taking the lead on lap 21, then pushed hard to pull a gap on his pursuers and crossed the line 1.799” ahead of Rossi and 1.826” in front of Viñales in third.

Despite continuing to struggle at making the best of his bike’s setup, Dani Pedrosa determinedly fought with Dovizioso until the end of the race, passing the Italian on the last lap to take 12th place.

“It was such an amazing race, I think we put on a fantastic show for the fans! I’m very happy, as I knew that today was important. Dovi was struggling a little this weekend, while I was feeling really good on the bike and had to make the best of it. When the race started I was thinking I had to stay calm and manage the tyres, but then Zarco hit me and I realized it was going to be a battle. I was in a group of fighters. I knew I had to push and defend, but also to attack. So I just tried to control the situation and then, with around eight laps to go, I just gave it my all. I pushed really hard for three or four laps and that was it. I’m happy with the win of course, but even more with going to Malaysia with a 33 point advantage!”

“In general we had a hard weekend here, and even today I couldn’t improve the situation in any way. I think the team did a good job, but I wasn’t able to be strong. The warm-up was wet and I lapped fast, but I didn’t have the chance to try the setup changes that we used afterward in the race. On the first lap I went wide, as did Dovi, and I lost contact with the group. But also later I wasn’t able to keep a fast pace. We must keep focused and try and do better in Malaysia.”