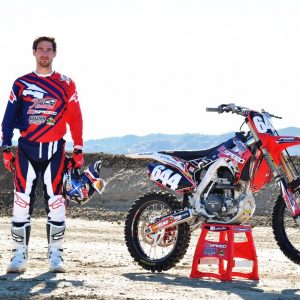 With support from American Honda, the Dutchman will take on the eight West Region rounds before the European motocross season starts in Valkenswaard at the end of March.

The 24-year old, who is already preparing to start his European title defence with Jtech, will face a new challenge on American soil where the stadium riding style is very different to what he will be used to.

Kouwenberg is no stranger to supercross though, after taking the European Supercross Lites title at EICMA this year. As well as embarking on what is widely considered to be a European rider’s dream, Nick will also accrue valuable competitive time aboard the CRF250R.

As part of the AMA Supercross series, the 250SX West Region championship pits 250cc riders against each other in major Western U.S. locations in a series of heats and a last-chance qualifier before the 15-lap feature race at each event.

Nick Kouwenberg
“I have been in America for a week already and I still don’t believe it is really going to happen. Things have been going really fast the past two weeks and I’ve been dreaming about this for so long, just to be racing in California is incredible! I am really thankful to Honda Motor Europe for helping to set this all up for me and they have been so supportive. I’m also really lucky to have Honda America supporting me as well so massive thanks to them and the BWR team. The first few days training I’ve been super safe because I don’t want to risk missing Anaheim 1! I’m just trying to build it step by step. For sure, racing in Supercross is going to help me prepare for defending my EMX250 title. The level here is bigger than anything: staying here for all the races alone, fighting every week with a way more packed field than Europe. It will be easier when I get back home, back with my parents, girlfriend, friends and my team who I took the title with. I’m really, really excited to be here, but it’s going to be way tougher than I, or anybody else, expects I think. I know when I get back home I will respect everything I have way more again.”

Davy Dousselaere – Honda Motor Europe Off-Road Manager
“I am very pleased that the BWR team, along with American Honda, can support our European 250 Champion Nick Kouwenberg in riding in the American 250SX West Region championship. We have seen this year how strong and consistent Nick is as a rider and I am interested to see how he will find racing in American supercross. It will be exciting for sure!”