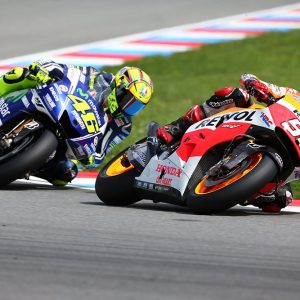 With the second half of the MotoGP season in full swing since the last weekends race in Brno, most of the riders already know what their future will look like. First to resign his contract was world champion Marc Márquez. Unsurprisingly the spaniard will continue with the Repsol Honda team for two more years, defending his title.

His teammate Dani Pedrosa will remain with him, also extending his contract for two more years with his long time team. The Pedrosa/Honda line-up is one of the longest cooperations in the history of MotoGP. Pedrosa is riding with Honda for more then ten years now, sadly without ever achieving a MotoGP world title on it. But despite this fact, HRC’s trust in Pedrosa’s skills are still unbroken. With 186 points he’s second in the overall standings, which confirms the statement made by HRC that “no one was faster than Dani”.

A punch in the face for Jorge Lorenzo, who hasn’t even received an offer by the Honda Racing Corporation. Lorenzo’s season started terribly with a crash at the first Grand Prix in Qatar and the unbelievable jump start in Austin. There were all kinds of rumors about the majorcans future; a possible change to Ducati or Honda, even quitting motorcycle racing, but now the Yamaha factory team announced the stay of the two time MotoGP world champion for another two years.

But it’s said the contract has a clause to it, allowing Lorenzo to leave the team after just one season. Same goes the other way around; if Yamaha isn’t pleased with Lorenzo’s results, they’re able to kick him out and search for a replacement. Despite the good news of Lorenzo continuing to ride in the premiere class of motorcycle racing, all this leaves a bitter note to it. Some might fear it’s not a continue by heart, to beat Márquez, but just for the sake of continuing and quitting whenever it’s obvious he can’t beat his fellow countrymen.

Lorenzo’s teammate, nine-time world champion Valentino Rossi, after his return to the Yamaha factory team last season, leads the spaniard by 36 points, being third in the overall standings. The thoroughly good results, with seven podiums out of eleven races, lead Rossi to the decision to continue with his team for also another two more years.

A good thing for the sport, since “the doctor” is still the face of MotoGP. The fans love him, despite his unsuccessful years at Ducati and he earns new ones with every race. It seems, that the change of his crewchief, replacing Jeremy Burgess with his fellow countrymen Silvano Galbusera, brought new wind to the team, motivating the 35-year old. Hopefully he will keep racing until he’s 40 years old, just like Colin Edwards does.

The “Texas Tornado” announced his retirement at his home Grand Prix in Austin at the end of the current season, after more then twenty years of racing motorcycles.  Now it’s said that the Indianapolis Grand Prix was the last one the texan ever raced. He will be on site at the Silverstone Grand Prix and the season finale in Valencia.

The replacement for the popular american rider will be former LCR Honda rider Stefan Bradl. The german signed with NGM Forward Racing, since LCR boss Lucio Cecchinello wasn’t able to offer him a contract in time. HRC lost interest in Bradl, who wasn’t able to achieve the expected results throughout this and last season. Cecchinello could keep Bradl, but without the support of HRC. The italian successfully found a sponsor on his own, but too late for Stefan Bradl, who signed with NGM Forward Racing in the meantime. With whom the team will be completed isn’t fixed jet.

Current rider Aleix Espargaró is talking with Suzuki, but still without a contract being signed. He would complete the “new” Suzuki team next to Maverick Viñales, who probably will move up from Moto2 for the 2025 season.

For Espargarós younger brother, last years Moto2 champion, Pol the next season won’t bring any changes. Just like his teammate, englishmen Bradley Smith, he’s staying with the Yamaha Tech3 team. Bot are quite satisfied with their results. Especially Pol Espargaró, who rides his rookie season, frequently beats his teammate.

In the overall standings he’s 6th, with the only other rookie Scott Redding just in 12th position. Redding will continue with the Go&Fun Honda Gresini, but he’s gonna race the factory supported bike, which is currently moved by Álvaro Bautista. Despite the younger Espargaró’s lead over Redding, the team is still pleased with his constantly improving performances.

So the brit gets the chance to ride the offical bike, whether it’s not sure where Álvaro Bautista is going to continue in 2015. Officially he’s in talks with Aprilia, who will have their comeback in MotoGP next season, but nothing is decided yet. Also, a continue with Honda Gresini can’t be out of question, but with Bautista riding the “open” bike. Just like Stefan Bradl, the HRC isn’t pleased with his performances, so the spaniard has to live with the consequences, which means leaving his place to the rookie Redding.

If Álvaro Bautista should ride with Aprilia, he could possibly team up with current Superbike rider Marco Melandri. Melandri changed from MotoGP to Superbikes in 2011, after achieving a podium for the Hayate Racing team. He seems to be a well chosen option, since he’s an experienced rider, which could be helpful to improve the new Aprilia bike.

Less happy with the way things are working out is one at Ducati. Cal Crutchlow changed from Yamaha Tech3 to the Ducati factory team at the start of the latest season. But the brit seems to have his issues with his Desmosedici, nor can he reach podiums. Throughout the whole season he hasn’t been able to gain satisfying results. Now he takes advantage of the possibility to end his contract with the italian factory before it officially runs out. In the 2015 season Crutchlow will replace Stefan Bradl in the LCR Honda team.

His place will be taken over by Pramac Ducati rider Andrea Iannone. The transfer into the factory team is a great reward for his constantly envolving performances. He’ll team up with his fellow countrymen Andrea Dovizioso, who currently is the best Ducati rider. This leaves the question of whom completes the Pramac Ducati team next to Yonny Hernandez. An imaginable choice would be Álvaro Bautista.

But the biggest questin for the coming season remains Jack Miller. The aussie leads the Moto3 championship after this weekends Grand Prix in Brno by 23 points. It’s no secret that HRC wants him to jump directly into the MotoGP class, without riding in Moto2 first.

Where he would get a place isn’t known, but Lucio Cecchinello confirmed, he’ll probably have two bikes for the upcoming season.  Miller would be a possibility, since Honda is so interested in putting him right into MotoGP.  The KTM rider does not say to much about, whether he’s going up to MotoGP or to Moto2. He wants to focus on winning the latest world championship, but sooner or later he he has to decide where he’s going next season. Obvious is that Miller won’t stay in Moto3. The matter over the pre-contract he had with Marc VDS to join their Moto2 team next year is now decided in court, since Miller still shows no intention to fulfill this contract. His personal manager and team leader Aki Ajo said, he leaves the decision all to his rider.

The Moto2 want him, and so does the MotoGP. With that, Miller is free to catch up all offers and decide for the one that suits him most. If that leads him to Moto2 or right into the premiere class will show in a couple of weeks.