The Argentina Grand Prix at Termas de Rio Hondo, formerly scheduled for April 19 has been postponed due to the coronavirus outbreak. The south-american race will be pushed towards the end of the Calendar, after the US Grand Prix. The race will now be held on November 22, with the Valencia GP moved up to November 29.

The MotoGP United States Grand Prix at the Circuit of the Americas has been postponed due to the outbreak of the COVID-19 Coronavirus in the US. The Austin race will now be moved to November 15, just a week before the Valencia GP, which will now be held on November 22 at the Ricardo Tormo Circuit.

The MotoGP 2020 Season will now kick off on April 19, a month from now, in Argentina at the Termas de Rio Hondo Circuit.

This is how the 2020 MotoGP Calendar is looking like at the moment.

The latest updates on the COVID-19 outbreak have forced changes in the 2020 MotoGP Calendar: FIM, IRTA and Dorna altogether have decided for some important modification to the season’s schedule, and specifically:

As already mentioned in this blog, the reasons behind these decisions are different.

Albeit Qatar would have merrily welcomed all the three races, they would not let any Italian citizen (or any other citizen traveling from Italy) within their borders after the very serious Coronavirus situation in northern Italy. With so many Italians in the MotoGP lineup (think Ducati, Aprilia and more), the governing bodies of the sport have decided to call the MotoGP race off. Thailand, on the other hand, has no problems with Italians entering the country, but have cancelled all sorts of large events and gathering in the fear of the quick spread of the virus.

It is now unclear wether the 2020 season will kick off in the United States on April 5 (it seems unlikely, but the are no official statements on the matter), in Argentina on April 9 or with the first European round in Jerez, Spain, on May 3. It’s a day-by-day situation really and we will have to wait for official communication from Dorna or FIM on how the 2020 MotoGP Calendar will look like.

Also, there is discussion on the rescheduling of the Buriram Race. The 2020 Thailand Grand Prix could be held on October 4, with the Aragon round moved up to September 27.

Here is how the 2020 MotoGP calendar may look like:

Dorna, the rights holder of the World Motorcycling Championship, have shared the provisional Calendar for the 2020 MotoGP season.

There are a few interesting changes to the Championship’s layout, which will see 20 races take place instead of the usual 19.

Marquez, Dovizioso, Rossi and the rest of the MotoGP grid, alongside the Moto2 and Moto3 classes, will go back to Finnish soil for the first time in 39 years, with the Finland Grand Prix set to go green on the weekend of 10-11-12 of June.

Due to the introduction of the Finland race, and the consequent stretch of the Championship, the Thailand GP will be moved from October to March. The Buriram track will host the second event of the season, right after the grand opening in Losail, Qatar on the night of March 8th.

More traditional races, such as Mugello, Jerez and Assen will more or less hold the same spot on the calendar, with the european leg of the season taking off in southern Spain on May 3rd.

Although this is labelled as a provisional calendar, we will hardly see more changes to these fixtures. 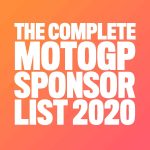 The Complete 2020 MotoGP sponsor listMotoGP, Sport Sponsorship
At RTR Sports Marketing we use cookies to bring you the best site we can. If you're cool with that, click OK. Or to find out more, read our Cookie Policy.OkCookie policy