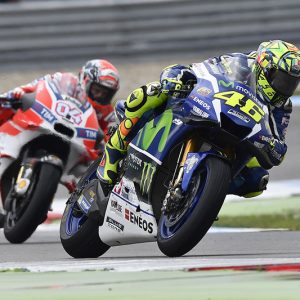 Yamaha Team with Riders Valentino Rossi and Jorge Lorenzo have difficult race due to Dutch Rain at the TT Circuit Assen. Dramatic rainfall played a big role in the proceedings.  As the first race was red flagged due to weather conditions after lap 14, Jorge Lorenzo and Valentino Rossi had to go out for a 12-lap dash. Lorenzo rode a steady race to claim six vital points for the championship. Rossi was unlucky to get caught out by the extremely wet conditions and was unable to complete the race.

There was uncertainty before the start of the TT Assen, as black clouds were looming threateningly above the riders‘ heads on the starting grid. Jorge Lorenzo had a brilliant start the first time round, moving up from tenth to fifth in the first couple of corners. However, not being able to keep the pace at the front in the treacherous conditions, he made his Yamaha as wide as possible to defend his position but was unable to find a good feeling and held 19th place when the race was red flagged.

The race was restarted at 15:02 with the starting grid being based on the position the riders held on the lap 14 standings. Having to commence the 12-lap dash from the seventh row on the grid, Lorenzo also fought bravely during the second part of the race. Similar to the first outing, he had a great start and was able to move up several positions to 13th by the end of the first lap. Though he couldn‘t keep up the momentum, he pushed as hard as he could without crossing the limit and took tenth place over the line.

Teammate Rossi had a good start in the first part of race from second place on the grid and took the lead coming out of the first corner. He was quick to find a good rhythm, but remained cautious. He kept a steady pace but had to let Yonny Hernandez and Andrea Dovizioso come through as he was trying to get a feel for the monsoon-like conditions. He later regained second place when Hernandez crashed out and at that point Rossi decided it was time to put the hammer down and closed back in to Dovizioso whilst being followed by Danilo Petrucci and Scott Redding. What followed was a tense battle between the top four riders, but it was cut short when the race was red flagged.

Rossi again had a good start the second time round, this time from third position, and was lying in second place after turn one. A lap later he was in the lead and soon opened up a gap of over two seconds to his closest rival, until he was caught out by the rain on lap three and unable to continue the race.

With a tenth place Lorenzo scores six points and is now 24 points behind Marc Marquez whilst holding second place in the championship standings. Rossi remains third in the rankings, 18 points behind his teammate.

“In the first race I was in 19th place and the last rider. I was even thinking about stopping because the conditions on the track were terrible, but I kept riding and they stopped the race. We restarted the race with less water on the track and a soft rear tyre and, though I was one of the last ones and there were many crashers, I gained more confidence than I had in the first race. These are important points for the championship, in the first race I would not have scored any. Marquez also scored a lot of points today, but Rossi, who could have recovered points, lost a lot. Ultimately we were able to save a difficult weekend. Before Le Mans we were also around 24 points behind and now we are more or less in the same situation, after two difficult races, so we have to think positive and keep in mind that we still have a lot of races to recover the gap to Marquez.”

“It‘s a great shame considering our great level of speed and competitiveness this weekend with our bike at this track. We could have gotten some important points for the championship after a difficult weekend and we could have taken second place in the championship over Lorenzo, but unfortunately I made a mistake. In the second half I pushed too much while I already had a good advantage. On that lap I was trying to push to understand my level. In the second part of the race we started with a soft rear, which provides very good grip, but unfortunately I entered turn ten too fast. I think we had a good chance today, but with my mistake I threw away a lot of points. The distance, especially to Marquez, is quite big, but we need to continue working hard like this and try to be competitive also next time”