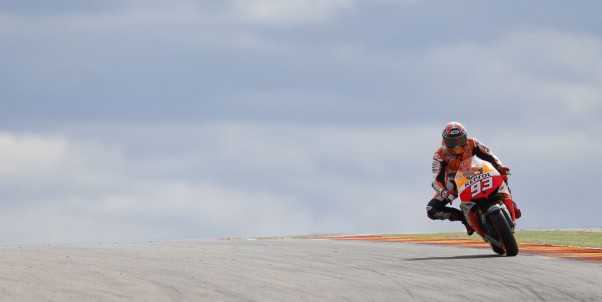 Repsol Honda’s Marc Marquez and Dani Pedrosa are en route to Aragon after a difficult weekend in Misano where Dani took a well earned 3rd but Championship leader, Marc, crashed on lap ten but was able to rejoin the race and finish fifteenth.

Motorland Aragón is round fourteen of the 2014 season. The ultra-modern 5.077km track is comprised of 17 turns – ten left and seven right, and a long straight of 968m. The first Grand Prix was hosted in 2010, and was rewarded with the IRTA Best Grand Prix of the Year award, the first time a circuit had received the prize in its debut year.

Both Marc and Dani have celebrated highs and lows in Aragón, Marc was taken out on the first lap in 2010 in 125cc, but came back in 2011 on the Moto2 machine to win the race, took second place in 2011 and won in MotoGP last year. Dani finished 2nd here in his first two outings and then won in 2012, but an unfortunate clash with teammate Marc last year saw his first DNF at a track where he has always been strong.