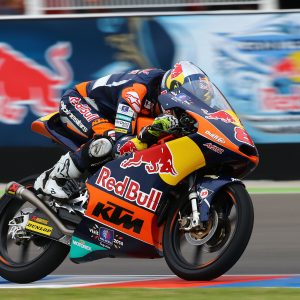 Some gossip seems to be omnipresent in the MotoGP paddock, but one of the biggest myths was now revealed.

Jack Miller will, with the direct support of HRC, move up into the MotoGP class right away, without competing in Moto2 first. This decision makes him the second rider in MotoGP history to ever skip a class. Only his fellow countrymen Gary McCoy did the same thing in 1998, eliding the 250cc class and going up to ride the 500cc-bike right away.

Miller, who is well known in the paddock for his aussie-like straightness, will start the 2015 season in the team of Lucio Cecchinello. He’ll be the teammate of Cal Crutchlow, who is new to the team, too. The brit will ride the factory supported RC213V Honda, whereas Miller will compete in the open category. The contract between Miller and HRC runs for three years, placing him in the LCR Honda team for the first two years.

This finally eliminates the conjecuters about Miller’s future and will make the talk about the issues with Marc VDS Moto2 team fall silent. The aussie had signed a pre-contract with the belgian-based team, placing him there for the 2015 and 2016 season, but later on his manager Aki Ajo and Miller himself denied that his was a binding agreement. The case is now clarified in court.

How he will fare in the highest class of motorcycle racing remains to been seen, but his future team chef Luccio Cecchinello said, they’re in no rush. The first year will be a learning year for Miller, to get comfortable with the new, more powerful, bike. The current Red Bull KTM Ajo Motorsport rider will switch from a 250cc Moto3 bike to a 1000cc MotoGP bike.

A huge step, that was questioned by many top riders, including MotoGP legend Valentino Rossi and current world champion Marc Márquez. But according to his well known personality, Miller was quoted, that the more people told him not to switch, the more he wanted to. He’s looking forward to his new chance, but now focuses on winning the Moto3 world title with his current team.