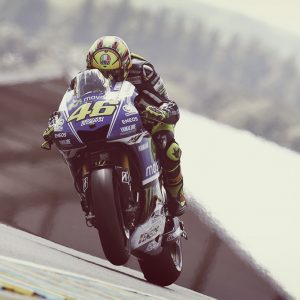 Lorenzo was able to make a half second improvement from the morning to the afternoon session as he focused on his set up. He led the second practice for most of the session, only dropping in the last ten minutes as his rivals switched to new rubber. He finished the day in seventh in the combined times, 0.6 seconds from first.

Teammate Rossi had a less fortunate day, the nine time world champion struggling in several set up areas on the notoriously unpredictable French track. Rossi ended the day in 10th place in the combined times, just over a second from the front.

“I’m satisfied with the pace which is constant and with my riding. We are not in a position that reflects our performance in the time sheets; we were the only one with the same tyre the whole session instead of putting a new tyre on at the end or running an open tyre. I think with a new tyre we could have improved half a second at the end.”

“I’m not happy about today, especially this afternoon. I wasn’t able to be strong and near the top. I have a lot of problems with the bike especially in acceleration, I have a big problem to open the throttle because the bike is very nervous. We tried to modify something during the practice but we didn’t fix the problem. I’m too far from the front so for tomorrow we have to check the data and improve to be more competitive; it is important to start in the top five here. The difference between Jerez and here for the settings is unbelievable so we have to change a lot of things. Le Mans is always like this!”