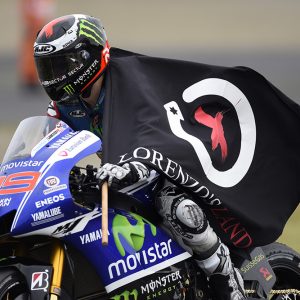 Movistar Yamaha MotoGP rider Jorge Lorenzo dominated at the Twin Ring Motegi for the second year in a row, taking a perfect victory at the Grand Prix of Japan. Teammate Valentino Rossi also shone, making it a double podium for Yamaha with a strong third place.

Lorenzo had a good start to the 24 lap race when he launched off the second row of the grid to arrive at the first corner in third place. He soon overtook Andrea Dovizioso to follow teammate Rossi, who snatched the holeshot into turn one  from a second place start position on the grid. Rossi worked to build a gap of just over 0.404 seconds over the first two laps, but Lorenzo was quick to arrive at the back of the Doctor’s YZR-M1. Feeling the heat from Dovizioso and Marc Marquez behind him, Lorenzo took the lead from his teammate on the fourth lap and cleared off at the front to set a new lap record of 1’45.350 four laps later. Lorenzo was then able to create a gap of nearly 2.7 seconds to take the flag and score his second consecutive Motegi race victory.

This result means Lorenzo equals five-time 500cc World Champion Mick Doohan’s record of 54 victories in his Grand Prix career, moving him up in the all-time winners list to a joint fifth place.

Teammate Rossi’s Motegi race was focused on fighting hard to fend off Marquez. On lap 10 Marquez made a first attempt in passing the nine-time World Champion, but Rossi refused to give up his position, immediately retaking second place in the last corner. He was unable to answer the next pass by Marquez before the hairpin, but was determined not to let his rival out of his sight, hoping for another opportunity to keep the championship open for the next race. While the threat came from behind as Dani Pedrosa started to close down the gap, Rossi pushed to the limit and was able to hold on to third place over the line.