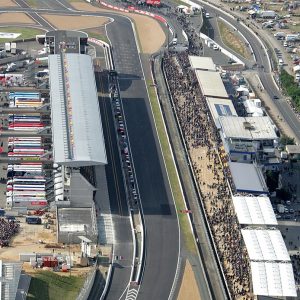 Repsol Honda’s Marc Marquez and Dani Pedrosa are en route to France after an incredible start to 2014, with Marc winning the first four races from pole position and Dani scoring a very positive 72 points from a possible 100, with two 2nd places and two 3rd place finishes. Thankfully Dani has healed well from his minor surgical operation last week to treat compartmental syndrome, in order to fix discomfort in his right forearm. It took just two incisions to enter the forearm, freeing the flexor and prone-extensor muscles in the appendage via minimally invasive microsurgery.

The Le Mans Bugatti circuit, very different from the much longer 24-hour car track, returned to the GP calendar in 2000 after an absence of four years, during which time the French GP was run at Circuit Paul Ricard in Provence. The track’s character is very stop-and-go, with plenty of slow turns where braking and acceleration performance are crucial. Riders and their engineers concentrate on honing their machines’ stability during braking, as well as improving rear-end traction for the numerous hairpin exits.

The 4.18km circuit features the same start-finish straight as the Le Mans 24hr event and a blindingly fast right-hander leading to the famous Dunlop chicane. Following this quick start to the lap, the stop-start character becomes evident, with a slow right-hander leading on to the main straight. It is one of nine right hand turns, and four lefts.

Dani has finished on the podium 7 times in Le Mans including an emphatic win in atrocious conditions during the MotoGP race last year and three victories in the lower classes (2003 in 125cc, 2004 and 2005 in 250cc). Marc has had mixed results at this circuit, including three DNF’s, but endured his first wet MotoGP race here last year and came through the field to take 3rd. He’s also enjoyed a victory in 2011 (Moto2) and a podium in 2010 (125cc).