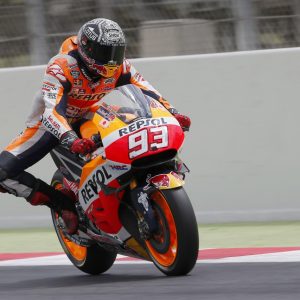 The Repsol Honda duo carried out similar testing programs, including electronics settings to improve the power delivery on corner exits, a new chassis and a new exhaust. Marc found some positives points and gathered ample data that he thinks the HRC engineers will be able to build on in the next races. Dani had already tried the new chassis and had raced on it yesterday, and today he continued to carry out some comparison tests.

Both riders suffered small crashes, Dani in turn 2 around 1:30 p.m., Marc later in the afternoon at turn 5. Neither incident involved consequences for the riders, but they were prevented from completing all of the planned tests with the Michelin new rear tyres.