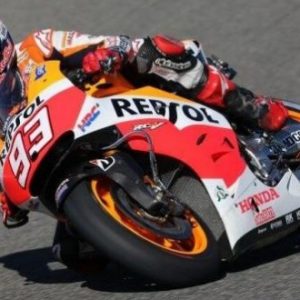 Polesetter Marc Márquez broke umpteenth record with his 12th win in one season, leaving the legend Mick Doohan behind. Márquez suffered a bad start and fell back to eighth place, whereas Valentino Rossi and Andrea Dovizioso both started well.

Finally it was Dani Pedrosa, who stayed in front, with Jorge Lorenzo closely behind him. They were followed by Dovizioso and Rossi, but it didn’t take long until this order broke.

Of course, Marc Márquez aggressively made his way forward and fastly closed up to the leading group. His teammate, however, fell out of race, because he braked too late and lost his front wheel. Pedrosa rejoined the race, but fell once more, this time without a chance to spring into action again.

This unexpected turn made Jorge Lorenzo first, his teammate Rossi second and Márquez third. Dovizioso fell back to fourth place and finally to eighth place, since his Desmosedici seemed to have a technical issue. Also Jorge Lorenzo had to lose a few places, but still finished the race on the podium.

The Yamaha factory rider was the only one who had chosen a hard tire, so maybe this could have been his problem.

Up front, Rossi tried to stick with Márquez, but ultimately had to give up. Since his win at the Silverstone Grand Prix, the Repsol Honda rider couldn’t finish a race on top of the podium, but today everything worked out well for the world champion.

With the three remaining top riders on the podium, the fourth place was taken by Stefan Bradl. The LCR Honda rider was going strong throughout the race and after Dovizioso lost ground, he managed to keep the following Bradley Smith behind him.

Both were followed by an injured Pol Espargaró, who competed even with his broken metatarsal. To end the race in such a good position is remarkable, but surely comes with immense pain. But despite his injury, the younger Espargaró left Yonny Hernandez, the back pleasing Dovizioso and Héctor Barberá behind him.

His older brother Aleix seemed to have bad luck again. After the collision between him and Stefan Bradl last week at Phillip Island, today it was Álvaro Bautista, who crashed and took Espargaró out as well. Alongside them and Dani Pedrosa, also Karel Abraham, Danilo Petrucci, Nicky Hayden and Alex De Angelis ended the race earlier.

Only Cal Crutchlow had to stop due to a technical problem that affected his Ducati. The final round of this year’s MotoGP season takes place at the „Circuit de Comunitat Valenciana“, Spain in two weeks.