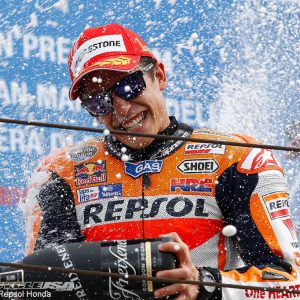 For the fourth time this season, the reigning world champion Marc Márquez takes home the victory at the Misano World Circuit Marco Simoncelli. It’s the first win in the MotoGP class for Márquez and the second one for Honda. Márquez’ teammate Dani Pedrosa could secure the first win at the adriatic coast for the japanese manufacturer in 2010. Ever since then Honda waited for another victory. The race itself was one of the most thrilling in the history of motorcycle racing. Whereas both of the smaller classes raced under perfect conditions, bad weather arrived just in time for the MotoGP race.

On the grid, every rider started on slicks, but soon the rain started to poure more and more. Up until then, Yamaha rider Jorge Lorenzo had let the way after starting from Pole Position. Marquez followed closely, with Lorenzos teammate Valentino Rossi climbing up the scale.

Soon Rossi was up front, but the rain forced the riders to change bikes. A lot of roders changed just in time, but both factory Yamaha riders tried to stay out as long as possible.

Rossi was leading at this point. The Doctor certainly didn’t wanted to submit his lead. Both Márquez and Lorenzo pitted earlier than Rossi, doing it at the right time. Since his slick tires were unable to work in those dry conditions, the italian had to return to the pits sooner or later.

But things went even crazier. Just after a few laps, the track started to dry out again, making the rain tires suffer. With the ever-changing conditions, a lot of riders decided to change the bikes once again. Márquez came in due to the information by his team over the pitboard just in time and managed to take the lead after the second bike-change. Lorenzo did as well, but unfortunately the spaniard crashed few turns later, because he was demanding to much from the still cold slick tires.

With Lorenzo out of the race, Tech3 rider Bradley Smith, who hadn’t changed tires for the entire race, got up even further than he was before. The brit crossed the finish line behind Márquez in second place. The podium was completed by Marc VDS rider Scott Redding, who had even crashed in the early stages of the race, but came back even stronger. Behind them in fourth place finished a phenomenal Loris Baz on the Forward Yamaha. The frenchman was the first rider to enter the pits the first time.

The fifth place was secured by the reigning championship leader Valentino Rossi. The local hero of Misano increased his lead in the overall standings to 23 points, due to Lorenzos crash. And even if the record world champion finished off of the podium, the Misano crowd still chanted for the MotoGP legend. Danilo Petrucci finished with another satisfying result. After his first podium ever in Silverstone, the italian secured a sixth place, outclassing the Ducati factory riders once again. Both Andrea Iannone and Andrea Dovizioso followed in seventh and eighth place. Repsol Honda pilot Dani Pedrosa was far away from repeating his performance from 2010. Whereas teammate Márquez could prevail, Pedrosa struggled throughout the race and could only end the race as ninth. Behind him Suzuki pilot Aleix Espargaro completed the Top Ten.

With Lorenzo crashing out of the race after the second bike switch, Tech3 rider Pol Espargaro unfortunately followed the example of his fellow countrymen. The younger Espargaro crashed one lap later. Also Pramac’s Yonny Hernandez and Alex De Angelis fell out of the race, but with still 19 laps to go. The rider with the most bad luck in Misano certainly was Ducati test rider Michele Pirro. The italian started as a wildcard-pilot for the second time this season, his first appearance being at the Italien Grand Prix in Mugello. All weekend thing went quite well for Pirro, the went directly into QP2 and finish in front of the actual Ducati riders Iannone and Dovizioso. But minutes before the race was started, some technical issues on his Desmosedici forced him to start with his second bike, which had a setup for rain. Pirro had to end the race, just like Hernandez and De Angelis, with 19 laps to go. All riders remained unhurt, but Lorenzo was taken to medical center after his crash, because there was a chance of a broken bone in his hand. Meanwhile Lorenzo confirmed that he hadn’t suffered any injuries whatsoever.

The next round of MotoGP goes underway on friday, 25th of September at the Motorland Aragón, Spain.