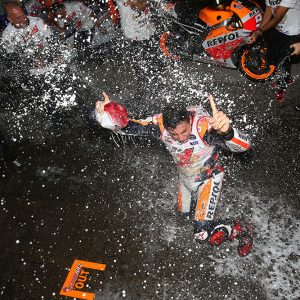 Marc Márquez has just achieved what nobody else ever could.

The Repsol Honda rider defended his world title with his second place at the Japanese Grand Prix. By doing so, he is the first Honda rider to ever achieve a title on their own property.

The spaniard started the race as fourth and lost a place due to the scramble at the beginning, but made his way up. After overtaking his teammate Dani Pedrosa and Ducati rider Andrea Dovizioso, Márquez fought with Valentino Rossi. The Yamaha factory rider tried to keep the championship open by keeping Márquez behind and preventing him from winning, but failed after a couple of laps. The requirement for Márquez to win the championship was to finish the race in front of Pedrosa and Rossi, or of course, win it.

He left Rossi and his teammate behind, but couldn’t catch up to the leading Jorge Lorenzo. The second Yamaha factory rider managed to grab fifth position in qualifying, but started good. He fastly took the lead and opened a gap to his chasers Rossi and Dovizioso, which lasted throughout the whole race. But after overtaking Rossi, Márquez decided to rather take home the title instead of risking a crash when fighting with Lorenzo.

The podium was completed by Valentino Rossi, who was too far ahead of Dani Pedrosa to make an overtake possible. Rossi had taken the lead from the beginning, after his uncommon second place on the starting grid, but lost it to his teammate Lorenzo.

Dani Pedrosa lost three places at the beginning, but fought both Ducati riders Andrea Iannone and Andrea Dovizioso. After doing so, Pedrosa lead a more or less lonesome race, since the Ducati could not compete with the factory Honda.

Dovizioso had started from Pole Position, but lost a place right at the beginning to fellow countrymen Valentino Rossi. Throughout the early laps of the race, Dovizioso was able to keep up with the leading group. But his Desmosedici has the offense manner of wearing down their tires faster than any bike on the grid.
Therefor Dovizioso, and also Iannone, weren’t able to keep up with their rivals in any race. This one unfortunately wasn’t an exception.

Both ended the Motegi Grand Prix one behind the other in fifth and sixth place. Dovizioso’s teammate Cal Crutchlow crashed out of the race after losing his front wheel, but luckily he remained unhurt.

Pol Espargaró had covered the seventh place on the grid, but lost this position to LCR Honda rider Stefan Bradl, who caught up on him due to the crash of Cal Crutchlow, who had been in front of the german. This left the younger Espargaró eighth, with his opponent one place ahead of him.

Espargaró’s teammate Bradley Smith benefited from Crutchlow’s crash as well. The Tech3 rider started in tenth place and by then moved up to being ninth, finishing the race in just this position. Next to Crutchlow, also Hector Barbera, Danilo Petrucci and Karel Abraham ended the race early, but none of them was hurt.

Of course, the winning celebration from Marc Márquez was something special. On the outlap, Márquez stopped by to receive several greating from friends, marshals and his brother Álex Márquez, but due to the possibility of Márquez winning the championship today, Honda had already planned a more spectacular celebration.

Márquez was welcomed by a samurai, flanked by two women in geisha dresses, and was handled a traditional japanese sword. He took it and cut through a rope, that left a balloon flying over the track. Later on in Parc Fermé, the samurai appeared again to join the lively celebration of Márquez and his whole crew.

The aussie showed an phenomenal start phase, getting from fifth to second position behind Husqvarna pilot Danny Kent. Kent had started from Pole Position and defended it properly throughout the first laps of the race.

Alex Rins was less fortunate, since he tried to make up his low ninth position, but had to go wide due to a move by one of his opponents in the very first corner.
Luckily he wasn’t involved in the crash that happened in the same corner and took Niklas Ajo, Scott Deroue and the two wildcard riders Hikari Okubo and Sena Yamada out of the race. Rins continued the race and after a great catch up finished it in tenth place.

Slowly but surely a few gaps teared off the field. The leading group included Kent, Miller, Álex Márquez, Brad Binder and Efren Vazquez. Kent was fastly overtaken by Miller, who leaded a strong race without any compromises. It didn’t take long until Kent was passed by Márquez too and fell back.

By now it was a fight between Miller and Márquez, with an occasional participation from Brad Binder, who recommended himself once again for his spot in the Red Bull KTM factory team next year, and a strong Miguel Oliveira. Sadly the Mahindra rider had a highsider with 8 laps to go and wasn’t able to rejoin the race again. However, he doesn’t seem to have further injuries.

In the final phase of the race, Efren Vazquez, John McPhee and Danny Kent joint the leading group, with Miller still in front. But with only three turns to go, both Miller and Kent braked much too late and had to go wide. This left the door open for Márquez, Vazquez, Binder and McPhee, who finished the race in this exact order.

Jack Miller finished behind them in fifth position, with Danny Kent behind him as sixth. The were followed by Romano Fenati, Enea Bastianini, Niccolò Antonelli and the re-joint Alex Rins.  Also Luca Grünwald fell out of race, but re-joint it again. Jakub Kornfeil crashed due to a highsider, taking Jorge Navarro with him.

The Moto2 was less open when it comes to lead changing. Tom Lüthi had started behind Esteve „Tito“ Rabat in second position, but due to a good start, he leaded the field after the first turn and hadn’t lost his lead throughout the race. He was followed by Johann Zarco, who made up a position as well, with Rabat being the loser of the start phase. First he fell back to third place, but lost several positions with few laps into the race. Rabat still finished the race on the podium in third position.

His teammate Mika Kallio, who’s strength is the start and the following escape, was stuck behind Maverick Viñales in fourth place and therefor couldn’t play to his strengths. It comes to the goods of Kallio and Viñales, that Zarco was early overtaken and fell back to fourth position, which he kept until the end.

This gave both of them the chance to follow the leading Lüthi and Rabat, but only Viñales made best of it. The spaniard overtook Rabat to try and catch up with Lüthi, but the gap between him and the Suter rider was too big, even if Viñales made good effort to close it. His opponent Kallio finished the Japanese Grand Prix as fourth.

The field behind the four stayed pretty constant throughout the race. Julian Simon had been sixth after the first corner, since Takaaki Nakagami lost several places, and kept this position until he crossed the finish line. Same goes for italian rider Franco Morbidelli, who benefited from Nakagami’s loss as well and stayed in seventh place from beginning to end.

Ricky Cardús delievered a brilliant start, catching up from 18th to eighth position. He sticked with it, until Hafizh Syahrin came along and managed to overtake him. Behind Cardús now in ninth place followed Xavier Simeon as tenth.

The next round of MotoGP will take place at Phillip Island, Australia next weekend.