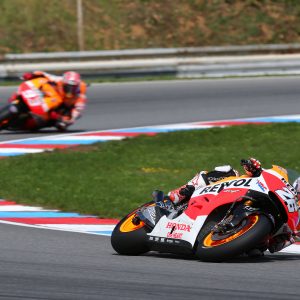 It was a day of mixed fortunes for the Repsol Honda Team in Brno as Dani Pedrosa won his first race since Malaysia 2013, but with it, ended Marc Marquez’ winning run as the Championship leader finished in 4th, only his third non-podium finish in the premier class.

It was another frantic start to the race with Marc dropping to 5th from his pole position start and Dani making up a position to 4th by the end of the first lap. By lap six, Dani had made his way through the field – setting a new fastest race lap (1’56.027) – and was 2nd behind race leader, Jorge Lorenzo. On lap six, he passed Jorge and never looked back, controlling the race perfectly to the end – setting a new fastest race time – and becoming the first rider other than Marc to win this season.

Marc lost some time battling with Iannone on lap five, but eventually passed him into 3rd and began to chase down the race leaders. However, on lap ten he began to lose time to Valentino who was chasing him and by lap thirteen he was unable to hold of the challenge. Marc held onto 4th and took important Championship points.

With this win, Dani has recovered 12 points on Marc and opened up the gap between him and Valentino in the Rider’s Championship. He now sits in second (77 points behind Marc) on 186 points, 13 ahead of Valentino. The Repsol Honda Team maintain their perfect 2014 season, winning every race, and extend their lead in the Team Championship to 139 points over their second place rivals and Honda now lead the Constructor Championship by 81 points. Since the introduction of the four-stroke MotoGP class in 2002, Honda have the most victories (six) at Brno with Honda riders winning for the past four consecutive years.

The team will be back on track tomorrow for an Official Post-Race Test, before heading to Great Britain for the next race on 31st August.