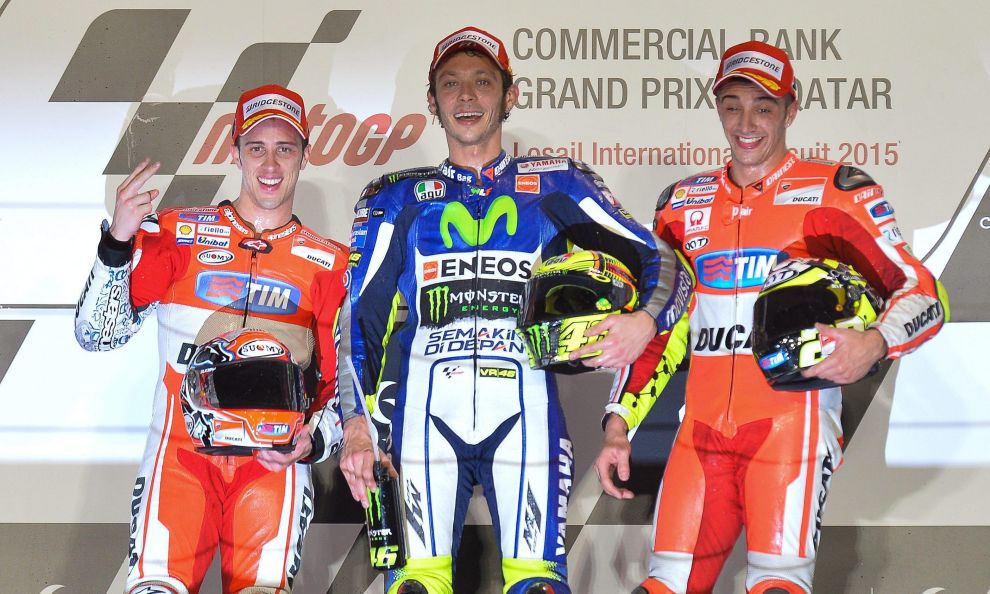 Valentino Rossi most certainly isn’t just the best rider in the „over 35“-league. By taking the first win in the brand-new 2015 MotoGP season, the italian proved once again why he’s worshipped by fans and media around the world.

After a less than satisfying qualifying and free practice sessions, Rossi benefited from the chaos around the first turn and fought his way from ninth to fourth position. He followed his teammate, the by-then leading Jorge Lorenzo, and both Ducati factory riders Andrea Dovizioso and Andrea Iannone.

Not only did the „Doctor“ close up on the leading group with 12 laps to go, he also passed first Iannone and later on Lorenzo, who had fallen back.

Finally, he fought hard for the lead with Andrea Dovizioso. But despite the fantastic improvements of the 2015 Desmosedici, Rossi crossed the finish line as winner for the 109th time.

Dovizioso, yesterdays Polesetter, leaded an incredible race with a lot of fights. After a very good start, the italian found himself in second place behind Lorenzo, but with the immense topspeed of his bike, he was able to overtake the Movistar Yamaha rider on the finish straight several times. In the corners, however, Lorenzo could regain his lead during the first few laps, but with his teammate Rossi climbing up the scale, Lorenzo fell back and managed to end the race in fourth position.

As for Dovizioso, he continued to battle with Rossi, but ultimately the nine-time world champion took the lead and closed the doors for Dovizioso. After the last turn, the factory Yamaha was too far ahead of him, so that even his higher topspeed couldn’t make up for the gap between him and Rossi.

His teammate Andrea Iannone completed the podium after a strong race. The italian left the first turn as third, but soon had to surrender to Rossi. Now being in fourth position, Iannone continued to follow the leading group. With only few laps to ride, Jorge Lorenzo continuous lost ground and couldn’t prevent Iannone overtaking him.

Behind the leading group, things were heating up. Current world champ Marc Márquez made a mistake at the beginning and had to go wide into the first turn. Falling back in the scale, Márquez uncompromisingly fought his way through he field, but wasn’t able to catch up with the first group.

He finished the first Grand Prix in fifth position, even overtaking his teammate Pedrosa, who started a low seventh and ended as sixth. Surely this wasn’t the season start the HRC had expected.

Another Honda rider lead the imaginary third row by finishing the Qatar Grand Prix as seventh. Cal Crutchlow already proved in winter testing, that he and his new RC213V work quite well together. After starting in 12th position, the brit fought hard and was rewarded with a seventh place in front of his former teammate, Tech3 Yamaha rider Bradley Smith in eighth place.

Second Tech3 rider Pol Espargaró followed closely behind Smith in ninth position, after being sixth in the first turn. A strong Yonny Hernández had captured a fifth place in qualifying, but unfortunately lost few slots, completing the Top Ten by the end of the race. But even with the superior place on the starting grid, a tenth place still is a satisfying result for the colombian and the Pramac Ducati team.

Behind Hernández, one of the new Ecstar Suzukis crossed the finish line. Aleix Espargaró had started into the race as 11th and finished it in this position as well. Between him and his teammate Maverick Viñales in 14th slot, second Pramac rider Danilo Petrucci and Marc VDS rider Scott Redding saw the checkered flag.

They were followed by Héctor Barberá, Stefan Bradl, who wasn’t pleased with how his new Forward Yamaha worked over the whole weekend, and Nicky Hayden. Eugene Laverty, Mike Di Meglio, Alex De Angelis and Marco Melandri finally completed the MotoGP field.  For rookie Jack Miller, Loris Baz and veteran Karel Abraham the race unfortunately ended earlier, with Baz returning to the pits with 14 laps to go.

Álvaro Bautista also returned to his box after a contact between him and Marc Márquez. Márquez, while furiously making his way up the field, overtook Bautista with a questionable move, that will be investigated by the race direction. By doing so, the gear shifter and several wires on the factory Aprilia were destroyed and Bautista had to retire from the race.

The second round of the MotoGP championship will start at April, 10th at the „Circuit Of The Americas“ in Austin, Texas.