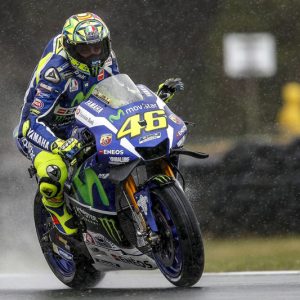 The Michelin Australian Motorcycle Grand Prix got underway today on Phillip Island with two drenched free practice sessions providing a frustrating experience. After a wet FP1, the Movistar Yamaha MotoGP riders were forced to sit out the majority of FP2, with the track conditions being too severe, meaning no valuable set-up data could be assessed.

Lorenzo used the session with caution while getting to know the wet weather tyres and trying to find a matching set-up. The crew worked hard to find better stability for his bike as standing water across parts of the track made it difficult to find a good pace. Struggling to get heat in the tyres, causing a lack of grip, he set a best lap of 1’45.651s for 19th place.

Rossi found a good wet setting early on in the morning and was featured as one of the main protagonists throughout the session, setting a best lap of 1‘40.998s at the end of an 11-lap long first stint. However, as he set his best lap on a super soft front tyre which riders are only allowed for no more than ten laps, all the times of his first outing were canceled, leaving him in 20th position.

The Movistar Yamaha MotoGP teammates had to be patient for the second practice session to get underway as it was delayed due to the weather conditions. The afternoon free practice session got underway when the track started to dry out at 15:45 local time.

The Doctor was again eager to head out and completed a couple of laps, but the track action wasn‘t to last. FP2 was red flagged and suspended until 16:45 local time with still more than 31 minutes of the session remaining and was ultimately not restarted for safety reasons.

The cancelation of FP2 meant both Movistar Yamaha MotoGP riders were unable to improve on their best morning lap, causing Lorenzo to complete the first day in 19th place in the combined session times and Rossi in 20th.

I exited the pit lane quite late this morning and I didn‘t make so many laps on the first run. I was progressing little by little, but I stopped too early and when I tried the second bike there was already more water on the track, so I did just one more lap. It was difficult to find a good reference to understand on which bike we were better in these conditions

The conditions were very difficult today. Unfortunately we had bad weather, it was very cold and there was lots of water. This morning we were able to ride for 20 minutes in acceptable conditions and it wasn‘t so bad, I was quite strong. In the afternoon the temperature went down and the amount of water was too much, so unfortunately we couldn‘t ride. We couldn‘t work on the feeling on the bike so we keep the quite good feeling we had at the beginning of the practice, but at the same time we lost the heat, so we have to wait for tomorrow.