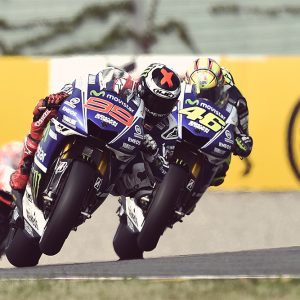 Both riders were quick to find their rhythm at the challenging German circuit during the morning free practice session. Topping the standings multiple times throughout the session, Jorge Lorenzo finished as leading factory bike in second place, only 0.253 from first. Teammate Valentino Rossi was not far behind in third place, 0.296 seconds from the front.

Lorenzo continued his form during FP2. The afternoon session was shortly interrupted by spots of rain, but the rack was quick to dry with action resuming. The Spaniard was soon back out on the track and managed to keep his times consistent within the 1’22’s, to eventually finish third in the combined times, 0.327 from the front.

Rossi used the second session to find a set-up that suits the harder front tyres. He was not able to improve on his time from the morning session and ended the first day of practice in sixth position overall, 0.425 from first.