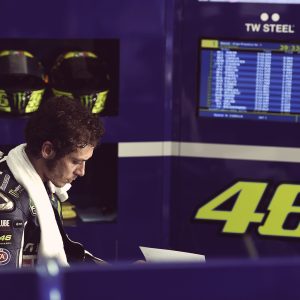 Movistar Yamaha MotoGP’s Jorge Lorenzo and Valentino Rossi got their first laps in around the Sepang International Circuit under very mixed conditions today as they prepare for this weekend’s Malaysian Motorcycle Grand Prix.

Lorenzo successfully kicked off the third and last overseas Grand Prix weekend during the sunny morning session. The Majorcan rider spent his first stint finding a good dry set up before posting a best lap of 2’01.416 in his second stint, just 0.037 seconds off the fastest pace.

Teammate Rossi also was quick to find a solid pace around the Malaysian track over the first practice session. The nine-time World Champion made the most of the dry 45 minutes session and put in a total of 18 laps to find the perfect race set-up. The Italian rode a best lap of 2’01.842, just 0.463 seconds off the front.

The Movistar Yamaha MotoGP teammates had to be patient for the second practice session to get underway as it was red flagged due to a sudden monsoon. Standing water created concerns about the track’s conditions. When the track started to dry out the afternoon free practice session was restarted at 14:30 local time.

Lorenzo and Rossi used the session with caution as they got to know the wet weather tyres and tried to find a matching set-up. Lorenzo led most of the session and found a good wet set up whilst Rossi struggled with a lack of grip on his YZR-M1. The slower wet times meant both riders were unable to improve on their morning time, causing Lorenzo to complete the first day third in combined sessions times and Rossi in sixth.

“The race will be held at 4 o’clock this weekend but it would be better if the race was at 2 o’clock because at 4 o’clock it usually starts to rain here. We hope to either have a completely wet race or a completely dry race, but not something in between because that would be difficult for everyone. In the wet I was really satisfied and happy. Midway through the practice I was pushing really hard and was feeling very good. My lap time was two seconds quicker than anyone else! Finally Marc and Dani improved at the end of the practice, but at that moment I was really fast. Valentino was having some problems, so this means our setting was working very well and I was feeling great on the bike. On the dry in the morning I also felt good from the beginning. I finished in third, which is like a second place because Aleix put on the extra soft tyre. Dani seems to be strong here on the dry, like always, but I think we can fight for the win.”

“I’m not very happy. This morning, with the dry conditions, it went not so bad. My rhythm was already quite good, but it wasn’t enough. I was not fast enough or strong enough to stay at the front, also because I wasn’t able to ride the bike in a good way, so we need to work. Especially, because in the wet this afternoon the situation was a lot worse. It was a very difficult practice and I wasn’t able to make the right speed to ride the bike in a good way, so the target is work, work, work. For Sunday we have to be ready for both conditions, because the weather here is very unstable and it could be either dry or wet. My bike had some chatter and we had to save the tyre, but I wasn’t able to get enough corner speed. I need more balance going through the corners to go faster.”