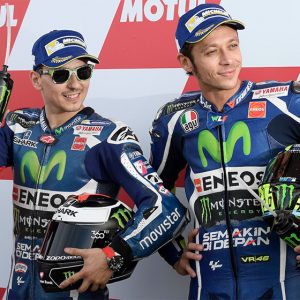 The Movistar Yamaha MotoGP team kept the momentum going during the Q2 session. Jorge Lorenzo was in a league of his own today, bettering the previous pole position record at Circuito de la Comunitat Valenciana Ricardo Tormo – set by himself last year – by 0.610s. Valentino Rossi was also in contention for a front row start and had the Spanish fans wait until the final minutes of the qualifying, to see him secure third place for tomorrow’s Gran Premio de la Comunitat Valenciana.

Lorenzo was on good form in front of the Spanish crowd during the Free Practice sessions and gave another blistering performance later in the afternoon. He was one of the first riders to leave pit lane and didn‘t waste any time to drop a time of 1‘29.849s, a new pole position record, on his first attempt to put his name at the top of the provisional leader board.

Having set the benchmark high he immediately returned to the pit box with ten minutes remaining. He quickly went out on track again and duplicated his stellar effort and set a 1‘29.613s before making a second stop. He quickly dashed off again with over three minutes left to defend his number one spot. Flashing red through all the sectors, the Mallorcan signed off his impressive qualifying efforts with a 1‘29.401s, leaving a 0.340s gap to his closest rival.

Teammate Rossi also brought his a-game to this afternoon‘s sunny qualifying session, to the delight of the local fans, with an impressive last-minute time attack. Avoiding traffic, he headed out as one of the last riders, giving him enough clear space on track. He gradually built up his pace, shooting up from eighth to fourth on his second lap, before setting a 1‘30.539s for third place.

With a provisional front row in his grasp he returned to the pits and there were four minutes remaining when he rejoined the session. Having been pushed back to seventh, the Doctor had to dig deep to reclaim third place on his next try. He further bettered his time to 1’30.128s, 0.727s from pole, on lap eight and secured third place to wrap up the last qualifying session of the year securing the seventh double front row of the 2016 season for the Movistar Yamaha MotoGP team.