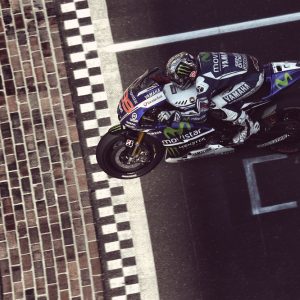 Lorenzo marked his return to fitness in style, taking a stunning second at the legendary ‘Brickyard’. Starting from third on the grid, the Spaniard initially dropped back to sixth place in the bunch up of riders on turn two before cutting back through the pack to take his place as a key protagonist of the race.

Teammate Rossi also made a stunning return to form after the summer break. The Doctor had an electrifying start, climbing four places from the second row of the grid to take the lead in the second corner from Andrea Dovizioso. On lap three his teammate Lorenzo arrived at the back of Marc Marquez and together they closed down the gap to the leaders. Within a few laps the tension reached fever pitch as the four rivals came within touching distance as they exchanged places numerous times.

On the tenth lap Rossi led from Marquez, closely followed by Lorenzo and Dovizioso. The order soon changed again when Lorenzo and Marquez both passed Rossi in turn two, the two Yamaha riders almost colliding in the process. Marquez took the lead with Rossi in second while Lorenzo followed in third. He was back on his way to the front when he experienced a big moment in the last corner as his knee clipped the curbstones, causing him to lose vital seconds.

Lorenzo then started to close the gap of 0.4 seconds to his teammate again and overtook him on lap 15. The Mallorcan, closely followed by Rossi, now had his eyes on the win, but by then the gap to Marquez had become too big for him to close. He finished the race in second, 1.803 seconds behind Marquez, whilst Rossi finished in third place with a gap of +6.558 seconds to his teammate.

Lorenzo’s sixth premier class podium finish at the US track moves him up to the fourth position in the standings with 117 points, whist the third place finish keeps Rossi in third on 157 points.