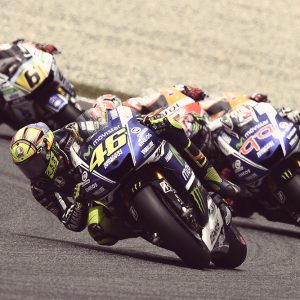 Movistar Yamaha MotoGP’s Valentino Rossi put in a stunning ride this afternoon to secure second on the podium in the GP Monster Energy de Catalunya.

Teammate Jorge Lorenzo threatened briefly in the early race laps before settling into fourth position, which he held to the line.

The Doctor started his Catalunya attack well, shooting from fifth to third into turn one from the start and then almost immediately into second behind his teammate Lorenzo. With 22 laps to go he made a decisive move for the lead and began a run at the front that was only broken towards the end of the race.

With seven laps remaining he was passed by both Marc Marquez and Dani Pedrosa in turns one and two, the two riders then almost immediately sitting up and raising hands for a yellow flag. Rossi took advantage of this and passed the two for the lead, holding it for a lap before Marquez passed again on turn two. With four laps remaining Pedrosa also made the move, dropping Rossi to third until the final lap. As the last corners came, Pedrosa made contact with Marquez, running wide and allowing Rossi back through to claim second on the podium, just 0.5 seconds behind Marquez.

Teammate Lorenzo made a strong start from second on the grid, delivering a trademark ‘Por Fuera’ pass round the outside of Pedrosa on turn one for the race lead. With his teammate closing fast behind, it wasn’t long before Rossi was passed, then Marquez followed on turn ten of the same lap. With 19 laps to go Pedrosa also squeezed through, leaving Lorenzo to hold fourth on the tail of the fighting three to the line.

Lorenzo’s fourth place delivers 13 points, keeping him in fourth position on 78, 34 behind Pedrosa in third.

Movistar Yamaha MotoGP will now take a short break before heading to the iconic Assen TT in the Netherlands on the 28th June.