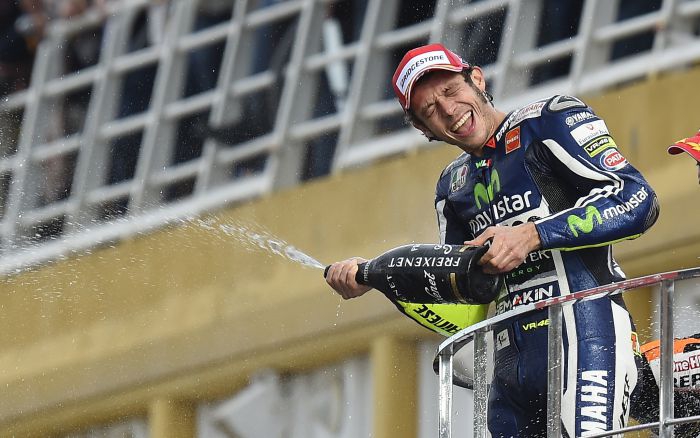 Starting from pole in what began as a dry race, Rossi took off as soon as the lights dimmed and arrived at the first corner in second place behind compatriot Andrea Iannone. Followed closely by Marc Marquez, the nine-time World Champion was quick to find a strong pace, but as soon as the first lap was finished white flags were waving, signaling rain and allowing riders to come into the pits to change bikes.

Rossi didn’t let the changeable conditions slow him down and set a fastest lap of 1’32.437 on lap five. As things closed up at the front, fans were thoroughly entertained with a heated battle between Rossi, Marquez and Iannone. Sparks were flying from Rossi’s bike on lap 12 as Dani Pedrosa started to get into the mix. Six laps later rain threatened again, allowing the Doctor to reel in Marquez. Rossi kept his head down, but as the track dried again he came just short and finished in a deserved second place, 3.516 seconds behind the front man.

Teammate Lorenzo had an unlucky end to the 2014 season. Starting from fourth on the grid, he soon got caught up in a fight with rival Pedrosa. The Movistar Yamaha rider looked to be the stronger of the two until drops of rain began to fall and he took a few laps to get a feel for the situation, falling back to seventh.

As the track started to dry Lorenzo regained confidence and rose to fifth, having retaken Cal Crutchlow and Andrea Dovizioso by lap nine. Four laps later the Spaniard arrived at the back of Iannone’s bike and won a hard battle with him before continuing his hunt for Pedrosa in third, until rain once again disrupted the race. Lorenzo struggled to get the bike stopped in the uncertain conditions and dropped down the order. He decided to come into the pits on lap 20 to switch to his wet bike and rejoined the race in 14th place. Unfortunately the gamble didn’t pay off. He dropped back to 21st and was forced to retire with five laps remaining as the conditions remained dry.

Tomorrow Rossi and Lorenzo will be back aboard the M1 on the Valencia circuit for the first test sessions in preparation for next year’s season.

Valentino Rossi: “I’m happy, because I finished this very positive season for me and my team with a great race and a good result here in Valencia. For me it’s a great achievement to take the pole position and to finish in second place, especially because this race was very difficult and the conditions were very dangerous. I tried to stay concentrated and not to make a mistake. It’s a bit of a shame that I started to suffer a little bit on the right side of the tyre, because I wasn’t so far from Marc, but it still has been a good season. We got second in the championship, a lot of podiums and two victories. Now, we have to work to be even better next year. My bad luck is called Marc Marquez, because without him I can win the championship and a lot of races. He did a fantastic job and won a lot of races. It’s a great pleasure to fight with him, but we are not so far and we never give up and try to come closer. Especially on Tuesday, but also tomorrow we will start working for next season. I am very close to 300 points, but Marquez won a lot more races than me, so me and my team need to improve the Yamaha to try and stay closer during the whole season. The test is important because we have a lot of new stuff to test for next year, so it will be interesting.”