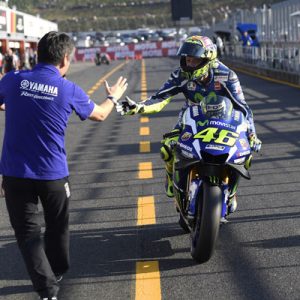 Rossi took his time at the start of the qualifying session and left the pits shortly before his teammate, hoping to find some clear track for his qualifying efforts. Once he found a good rhythm, he immediately made his mark with his first flying lap securing provisional third place. He bettered his time on his second flying lap of 1‘44.736 before being pushed back one place by his teammate. The Doctor continued to improve his time by five-thousands‘ of a second on his next attempt, but as the pace quickened, he returned to the pit box for a quick stop, holding fifth place, with more than five minutes on the clock.

A quick minute later the nine-time World Champion returned to the track. Having dropped to sixth place, he gritted his teeth and put on the heat once more when he rode a fastest second, third and fourth sector towards the end of the session to drop a 1‘43.954s for pole. With just enough time for one more lap, his name again flashed up in red in the first two sectors, but he was unable to further his advantage. Yet his earlier fastest lap remained unchallenged, giving the Italian his 64th pole position of his Grand Prix racing career, with a 0.180s margin over his closest rival.

Lorenzo gave a superhuman performance after a challenging start to the second day at the Twin Ring Motegi circuit. The Mallorcan suffered a big highside at the end of the FP3 session in turn 2 and had to visit the Medical Center before being helicoptered to the Dokkyo Hospital in Utsunomiya City for a CT scan. He was declared fit to continue his quest for a top result at the Japanese Grand Prix when he returned to the circuit, in time to fight back hard in FP4 and secure third place.

The current World Champion‘s efforts were equally impressive in the Q2 session. Being the last rider to start the 15-minute qualifying heat, Lorenzo made sure to leave pit lane with enough space between him and the rest of the field. After a cautious start, his second flying lap saw him post a 1‘44.399s lap, moving him up from tenth to second position before he headed back to the pit lane with a little less than seven minutes of the session remaining.

Lorenzo was soon back out on the track and, now in third place, he was ready to put the hammer down once more. Unable to further improve his time on his fifth hot lap, he was pushed down to fourth place as his teammate took over at the top of the time sheets, but he didn‘t give up. He dropped a stunning last lap of 1‘44.221s, 0.267s from pole, to start tomorrow‘s race on the first row from third place on the grid.

Yamalube Yamaha Factory Racing Team wildcard rider Katsuyuki Nakasuga also had a good day at the track. He continued to make progress and positioned his YZR-M1 in 16th place on the grid for tomorrow’s race.