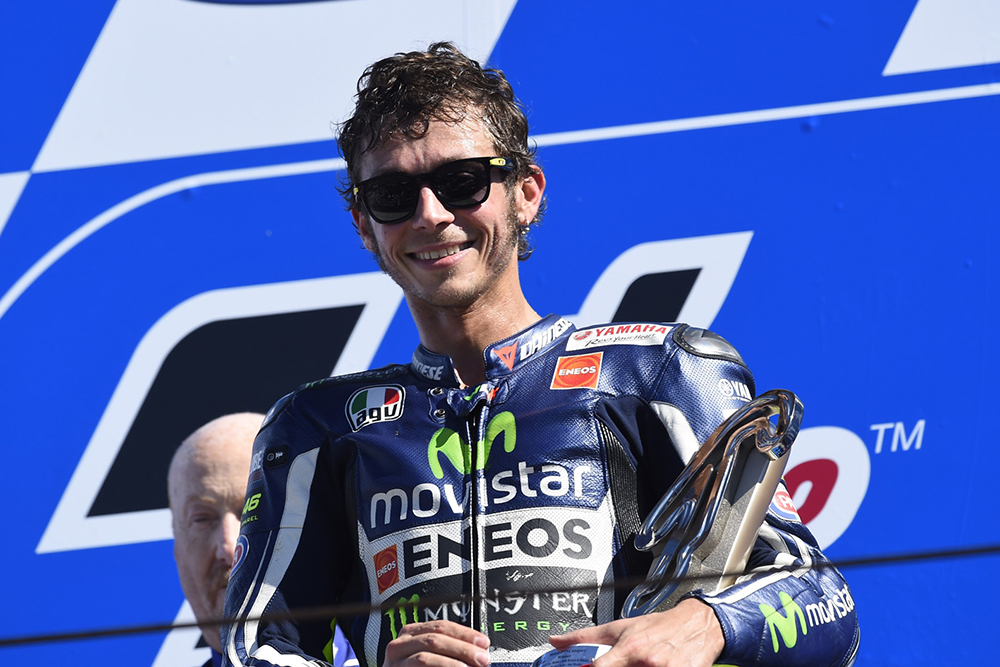 Teammate Jorge Lorenzo came home in second to make it a perfect Yamaha one-two finish. The Doctor made his intentions clear from the off with a flying start to move up from third to second into the first corner, tucked in behind teammate Lorenzo. An early attack by rival Marc Marquez was quickly dealt with and then with 25 laps to go he was able to pass Lorenzo to lead the race.

Championship leader Marquez followed soon after and remained within half a second of Rossi until with 19 laps remaining he lost the front trying to keep up and crashed out, taking himself out of contention. From that point the Doctor was unstoppable, building a gap of over two seconds to his chasing teammate, he held command of the race to the finish line to take his first race win since Assen last year, and Yamaha’s first MotoGP win of the season. Teammate Lorenzo flew from his pole position on the grid to grab the holeshot into turn one, with Rossi following right behind.

Having opted for the harder front tyre option he was unable to make a break and hold off Rossi in the early laps. Having seen rival Marquez crash out in front of him he then delivered a trademark Lorenzo race of consistency, holding his lap times a little over two seconds behind Rossi whilst gradually building a gap to Dani Pedrosa and Andrea Dovizioso battling for third behind him.

He crossed the finish line over four seconds ahead of them to take his seventh podium of the season and complete the Yamaha one-two finish. Rossi’s 25 point score adds to his total to make him the first MotoGP rider ever to reach over 5,000 career championship points. He now sits on 214 in third position in the standings, just a single point behind Pedrosa in second. Lorenzo takes 20 points to bring him to a total of 177 in fourth position, 35 ahead of Dovizioso in fifth.