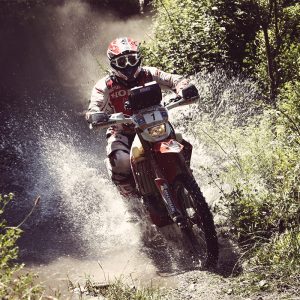 mportant victory for Paulo Goncalves on this second stage of the rally. A result achieved due to the consistency and hard work, from both the riding and the correct interpretation of the roadbook. Paulo has done an outstanding performance, beginning the stage on third place – due to the time he lost yesterday having to stop and open a gate in order to be able to follow the set route, being reclassified to third place at the end of the first stage – with a good pace on his Honda CRF450R. Setting the best time of the day, with one minute and twenty seven seconds lead from the runner-up. Today’s result makes Paulo take the lead on the overall standing.

Joan Barreda finished on third place. The rider from Castellon had previously set the best time up until the refueling point, but immediately after made a navigation mistake by taking the wrong route. While riding on it he found himself on a collision course with another rider, luckily avoiding him. Barreda was able to recover from the incident and regain the pace he had before this moment.

Teammate Hélder Rodrigues also made a mistake while reading the roadbook today, causing him to lose several minutes while regaining the correct way. The Portuguese rider finished in ninth place at the end of the stage and is currently eighth on the overall standing.

Tomorrow will take place the first part of the marathon of the Sardinia Rally Race between Arbatax and San Leonardo. Which means that the rider have no technical assistance and the bikes will be taken to a parc ferme upon their arrival to the surroundings of the medieval church of San Leonardo.