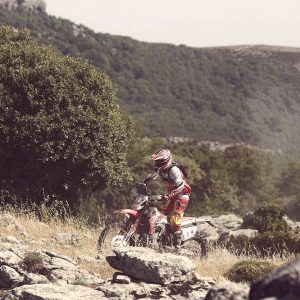 Joan Barreda navigated the first part of today’s stage without being able to use the roadbook that had broke yesterday. He was able to follow the tracks of the riders ahead of him and reach the refueling point, where he had assistance and solved the problem. During the second Special ‘Bang Bang’ was back and won the SS7 and registered the best global time of the 115 kilometers completed today.

Hélder Rodrigues started in fourth place and has finished the second Special of the day in third, making him fifth in the overall. The Portuguese has gained a valuable position on the general standing and has the podium within reach, since he is only two minutes away from the rider that precedes him.

Paulo Gonçalves was forced to complete the first stage without the use of the front brakes, causing him to modify his position on the bike in order to be able to position the bike to brake, resulting in sever back pain for the Portuguese rider. Unable to change the front brake, he lost time during the first stage, preventing him from reaching fourth place in the overall standing.