Honda Press Release: Casey Stoner will part ways with the Japanese manufacturer at the end of 2015, after a five year collaboration with Honda Racing Corporation. Casey joined the factory squad – the Repsol Honda Team – in 2011 and adapted immediately to the RC212V bike winning ten races, and taking one 2nd place and five 3rd places. His victory in the Australian Grand Prix was his fifth in succession at his home race where he clinched the World Championship, Honda’s first since 2006. 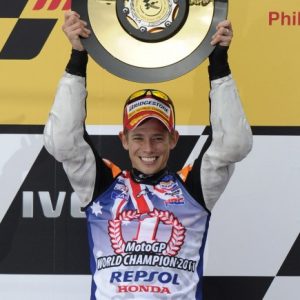 Honda Racing Corporation would like to thank Casey for all that he achieved during his time at Honda, and wish him and his family the very best for the future.

“We have great memories of Casey’s time with Honda. From the moment he arrived in 2011 in the Repsol Honda Team we had a very close relationship and we always enjoyed speaking to him about racing and technical matters. Of course his Championship win in 2011 was a very special moment for us and a highlight of my career. Even after his racing days were over, I enjoyed attending his tests to take with him and spend time together. We would like to thank him for everything he gave to us over the past five years and send our best wishes to him and his family”