Movistar Yamaha MotoGP‘s Valentino Rossi showed an impressive pace in the Grand Prix of The Americas to claim his third consecutive podium finish of the season. Teammate Maverick Viñales was looking confident, but his race ended prematurely 20 laps before the end.

Valentino Rossi at the GP of The Americas

Rossi was strong out of the gates and settled into third position exiting the first corner. He chased Marc Marquez and Dani Pedrosa in the opening laps, careful not to let them clear off into the distance.

With 15 laps to go the Italian went wide in the first corner and got into a scrap with Johann Zarco. After a touch between the two Yamaha riders in turn 4, the Doctor was pushed wide, but he quickly rejoined the track and held on to third position. 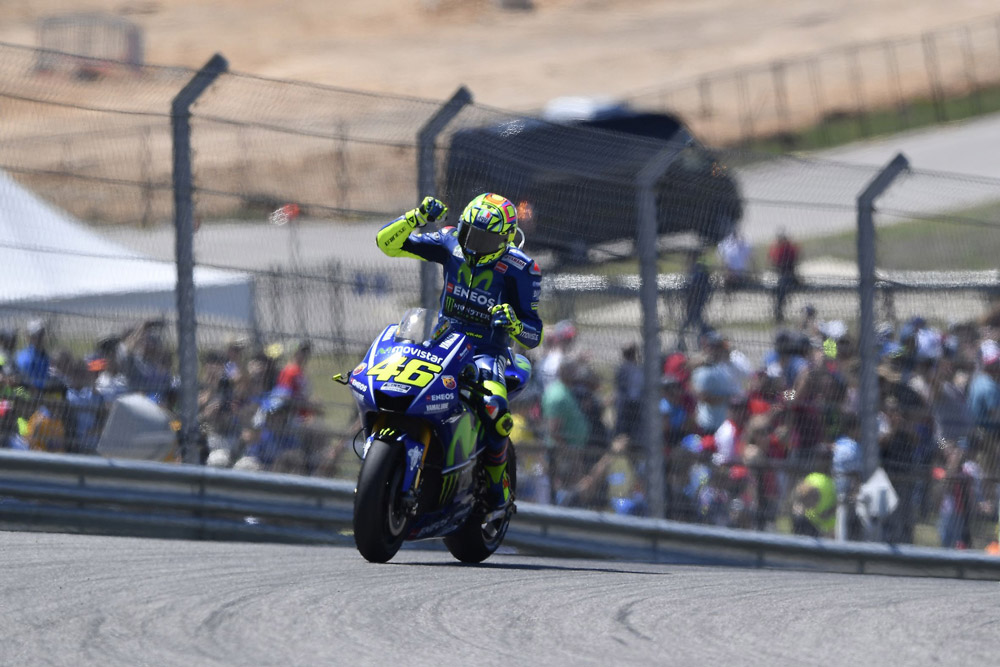 As the front runners quarrelled over the next few laps, Rossi took the opportunity with both hands to close the gap. He reached Pedrosa with five laps to go and bided his time. Two laps later, his carefully planned overtake came in the last corner. The nine-time World Champion then put his head down. He was on the limit for the last two laps to take the flag +3.069s behind the leader, securing second place despite being penalised with 0.3s at the end of the race, due to the incident with Zarco.

Viñales had a busy first lap. Starting from second place on the grid he got off the line well, but found himself in fifth place after all 22 riders had squeezed through the first corner. He soon overtook Jorge Lorenzo for fourth and was eager to remain on the tail of his teammate on their way to the front, but his challenge was cut short by a crash in turn 16 one lap later. The Spanish youngster was left unhurt, but unable to continue the race.

The Yamaha Factory Racing Team will next cross the Atlantic Ocean for the Gran Premio de España at the Circuito de Jerez in two weeks‘ time.

It was a great surprise for me and for the team because we were struggling very much with the new bike, especially during the winter. I think we need more time to understand the setting and the way to ride it, but at the end this bike is very good, especially in the race and with the used tyres. I‘m so happy, because today I wasn‘t so far from the front and it‘s also the best result of my career at this track, so it‘s good. When I saw ’Viñales out‘ I started to think “I‘m on top of the championship standings”. I felt good and I also saw Dani having some problems, especially on the right, so I said “maybe those four points are important” and in fact it was like that. For me the penalty wasn‘t right. The problem is we either do it like this, or we crash together at a very dangerous point. But for me, though accepting Race Direction‘s decision, the mistake was made by Zarcoù

It was a really strange crash. I did exactly the same as in Warm Up and all weekend, but I crashed. I think we had some issues with the front tyre, but anyway, we know that we are strong and that we have the speed. We can be strong again, so I‘m going to try to forget this crash and come to Jerez even faster, stronger and more consistent than I was here.