Movistar Yamaha MotoGP‘s Valentino Rossi landed his first podium finish of the 2018 MotoGP season with a strong third place at the Losail International Circuit. Maverick Viñales also battled for all he was worth and rode a superb catch-up race from 15th to 6th place, earning himself some crucial championship points.

Valentino Rossi had a lightning fast start from eighth place and stormed to fourth on a perfect opening lap. With a podium place in his grasp, he closed in on Dani Pedrosa and cruised past him at the end of the second lap on the start-finish straight, before making a text-book move, breaking hard into the first corner.

The leading pair, Johann Zarco and Marc Marquez, ran a hot rhythm, but not strong enough to shake off the Doctor. He was a man on a mission, determined not to let them escape and dropping consistent 1‘55s laps. With 17 laps to go, the Italian made his move on Marquez, so he could challenge Zarco for the lead, but soon things got tense. At the start of the 11th lap the 39-year-old went wide into turn 1, allowing Marquez and Andrea Dovizioso through, but he didn‘t let it get to him. 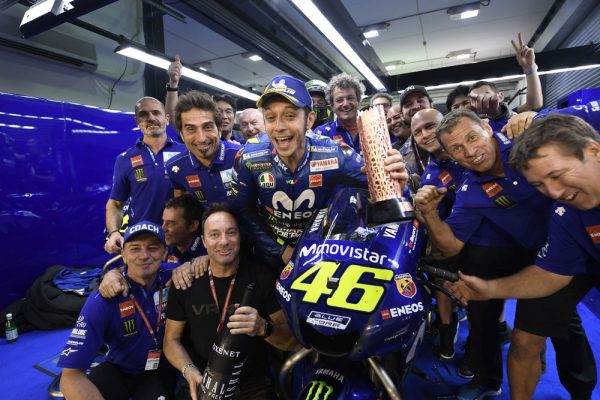 The final five laps were exactly what the fans had hoped for. Valentino Rossi fought his way past Zarco for third. The 46-rider threw everything he had at breaking away from chasing riders, which he managed perfectly. However, he was unable to get close enough to battle with Dovizioso and Marquez in the final laps and finished the first race of the season with a well-deserved third place, 0.797s from first.

Viñales made a cautious start, dropping back from 12th on the grid to 15th place in the opening laps, but that certainly didn‘t mean he was out for the count. After three laps, he got into the rhythm and started his charge. He was running the same pace as the leading group and as a result he barged through the rider field.

With Alex Rins and Jorge Lorenzo crashing out with 10 laps to go, the number-25 rider breached into the top-10. He then picked off Jack Miller on the next lap and also overtook Andrea Iannone for eighth place one lap later.

Viñales had his sights set on the front group. They were fighting some 2.5s ahead of him, but his pace was still red hot, as he kept posting times in the 1‘55s. With three laps to go the Spaniard tapped onto the back of Pedrosa. A lap later he overtook his compatriot and also breezed past Zarco. He gave Danilo Petrucci a run for his money for fifth place, but he ultimately had to settle for sixth position, 3.888s from the front.

The Movistar Yamaha MotoGP Team will be back in action in three weeks’ time at the Termas de Rio Hondo circuit for the Gran Premio Motul de la República Argentina, held from April 6th – 8th.