Sponsoring a sport? Why where you’re positioned matters

In sports sponsorship, the physical positioning of the sponsors is of huge importance in determining visibility and ensuring a good ROI. Different positions have different costs and different visibility, and this can, of course, be down to various factors – the platforms that they’ll be distributed on, for example, and the popularity or dynamism of the sport in question. Both of these things will determine the audience size and the potential reach of your campaign.

Where can the sponsor be put?

Generally, sponsors can be positioned in five places (or, “macro elements”):

A sponsor can appear on one, more than one, or all of these places, and each element is likely to perform different functions at different times during the sponsorship campaign. In most campaigns, the title sponsor and the key partners will appear on all the materials, whilst the smaller sponsorships will naturally have to exclude some of these areas.

What are the most visible positions for a sports sponsor?

In a marketing world that is led by research, reports and databases, gut feelings are unlikely to be the best thing to rely on when making this choice. Instead, opt for analysis that can give you an informed decision that’s based on your particular aims and budget. Data from Clearsight on the last year of MotoGP and provided to agencies and teams, clearly shows which positions are most visible on each rider and on each motorcycle.

It is important to note that the rider generates just as much, if not more, visibility for the sponsors than the bike itself. The pie chart below, from a Clearsight study on a team that for obvious reasons we cannot name, divided the weights of visibility along the race weekend. Here, we see that the pilot generates 48% of the visibility, the motorbike 27%, the staff 13% and the garage 7%. 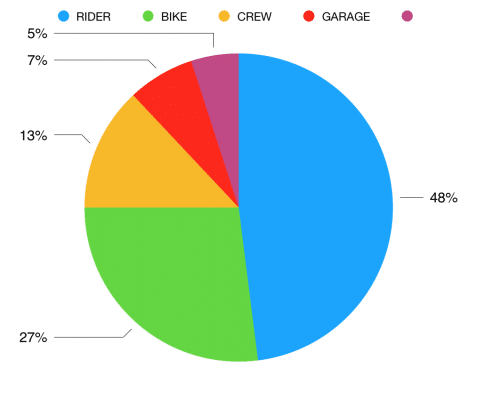 Obviously, these percentages differ from team to team and from weekend to weekend. But the example underlines a fact that is too often underestimated: that a lot of the visibility of a sponsor is generated during interviews, press conferences and other moments, in which the bike is not present.

A small space on the rider’s suit, in a position of great visibility during a television interview, can generate returns of visibility superior to big brands on the bike. After all, a bike is almost always moving and is rarely directly framed on camera.

Where should sponsorship appear on a bike?

If you do decide to go ahead with placing your name and logo on a MotoGP bike, it’s important to know which part of the bike is likely to yield the greatest returns. It might seem obvious that large logos on very large spaces, such as the sides of the bikes, are the most effective solution. However, this might not be the case – and in fact, research shows that the front fairing, made up of the area around the number and the windshield, is the best place for visibility.

The graphic shown below examines six areas of the motorcycle: 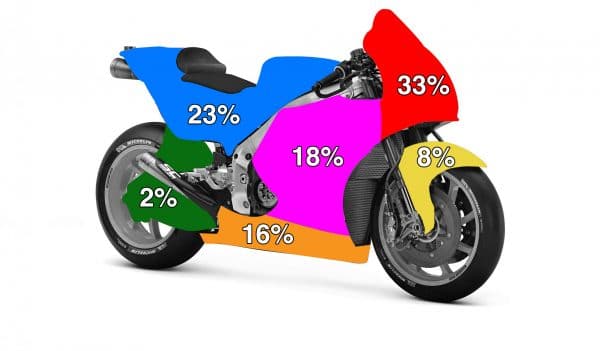 In this case, the fairing generates 33% of the entire visibility on the bike, whilst the second place is up to the tank and tail area (23%). Only in the third position is the large side fairing (18%), not too far from the thin strip in the lower area (16%). Meanwhile, the two fenders are almost invisible, adding 10% to the total.

Thinking about how a motorbike is seen during a Grand Prix, these statistics are actually not that surprising. It is very rare that a motorcycle is ​​framed sideways in a perfectly vertical position, for example. It is, in fact, more common, due to the position of the television cameras, for it to be positioned at the end of the straights or along the curves. This benefits the front and the low sides, which are widely exposed when the bike is bent.

The same applies to photos in newspapers, magazines and online: it is very rare to see a side bike on the cover. Much more frequent is the front image of an impressive bend, that shows off the talent of our MotoGP superstars.

One thing that must be taken from this piece is the importance of strategic planning when it comes to the creation of your sports sponsorship plan. If the devil is in the detail (which it is) the same must be said for marketing returns and commercial benefits – which must be identified after a careful study of all the factors at play.

It might seem converse, but it’s clear that bigger isn’t always better in motorsport sponsorship. In the positioning of sponsors’ logos, there are clever positions and small stratagems that can significantly increase brand exposure. Industry professionals know this well because they have reams of data and multiple case studies that prove it.

The role of reporting is central in any sponsorship plan – through reports we can understand completely what the strengths and weaknesses of our operation are, allowing us to correct them, and calculate how well our sponsorship is going – and what might need to be changed.

If you are interested to sponsorships read Sponsorship Activation and please contact us at our email address: info@rtrsports.com

For more than 20 years, RTR Sports Marketing has specialized in sports sponsorship, with a particular focus on MotoGP and motorsport.

If you are interested in these topics, or if you want to deepen and share with us your sports marketing programs, you can write to us at any time: info@rtrsports.com 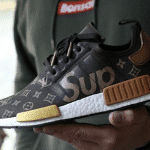 Licensing and co-branding: 2 opportunities to invest in sports marketingSports Marketing 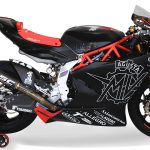 MV Agusta returns to Moto2. Here’s why manufacturers love racingMotoGP, Sports Marketing
At RTR Sports Marketing we use cookies to bring you the best site we can. If you're cool with that, click OK. Or to find out more, read our Cookie Policy.OkCookie policy