There’s no question that Russia has been involving itself in the world of international sports for a long time. Before hosting last year’s Fifa World Cup, the Black Sea resort of Sochi held the 2014 Winter Olympics – and on a less prominent scale, the country has welcomed championships in everything from the canoeing to judo to the pentathlon in the past decade. This year, the world’s biggest country is playing host to the multi-sport Winter Universiade and the AIBA World Boxing Championships.

But what of the question of sports sponsorship in Russia? Is all this hosting of international athletes paying off in a business sense? And are Russian brands utilising it to boost their profiles internationally?

The answer is yes. Here, we’ve looked into how sports sponsorship in Russia – and by extension sponsorship campaigns deployed by Russian companies outside of it – is taking shape.

Like many emerging markets, Russia appears determined to make its mark on the world stage – in everything from its politics and its relationship with leading Western powers to, as we’ve mentioned, its heavy involvement in major sporting competitions.

According to the Asia & Pacific Policy Society (APPS), Russia’s sponsorship within the sporting arena is an example of “soft-power statecraft” – and with Vladimir Putin keeping a close eye on what the rest of the world is doing (and how his nation could benefit from it) this is hardly surprising. APPS concludes that a poster released ahead of last year’s Fifa World Cup harked “back to communist-era Soviet Union, when the country was in its pomp and at the height of its global power. In other words, the poster’s inference is that Russia wants to be considered great again.” APPS also calls the Sochi Winter Olympics a “tangible, and ostentatious, manifestation of Russia’s desire to present a strong, positive image of itself to the world.” It seems that the unifying nature of sport makes it a perfect outlet for the Kremlin’s patriotic, globally-focused PR campaign.

Of course, it’s not alone in this. In terms of sponsorship Russia’s fellow emerging market China was heavily represented at last year’s World Cup, with property company the Wanda Group acting as an official Fifa partner and Hong Kong-based dairy company Mengniu, TV and whitegoods developer Hisense and Guangdong-based phone manufacturer Vivo all bringing prominent sponsorship campaigns.  Quoted by The Guardian, Salford University professor Simon Chadwick suggests that a surge in Asian sponsorship deals might have come as a result of many Western brands now seeing Fifa as “toxic” after its corruption scandal in 2015.

Meanwhile, Gulf countries are also determined to prove themselves as wealthy world-players in the same way – see Qatar’s hosting of the 2022 Fifa World Cup, for example, as well as Dubai-based Emirates’ long-time sponsorship of Arsenal FC, Real Madrid, AC Milan and Paris Saint Germain. Glenn Lovett, managing director at Nielsen Sports, believes that many Middle Eastern brands will do their best to capitalise on their region’s hosting of the world’s biggest football competition ahead of 2022.

Will Russia follow suit? With its apparent determination to promote its image both abroad and at home, it seems more than likely.

So, where is Russia investing in sports sponsorship?

Who? A massive Russian gas company with close to half a million employees

Gas company Gazprom has sponsored UEFA Champions League since the 2012/13 season, and last year also sponsored the Fifa World Cup, after signing a deal in 2013 to become an official Fifa partner for all competitions between 2015 and 2018. Part of the company’s Champions League sponsorship includes raffling tickets to sports fans across the world, as well as more traditional sponsorship activations such as bespoke TV slots and digital pitch-side boards.

Aside from major football competitions, Gazprom has a long history of sponsoring individual clubs – German team FC Schalke since 2007 and Red Star Belgrade since 2010, the latter with hoardings, shirt sponsorships, and support of its youth teams.

Who? A majority Russian state-owned bank

VTB became the first sponsor of the Georgia Gymnastics Federation in the run up to the 2015 Youth Olympics, following its previous involvement with rugby, football, basketball, waterpolo and auto-sports in the country. 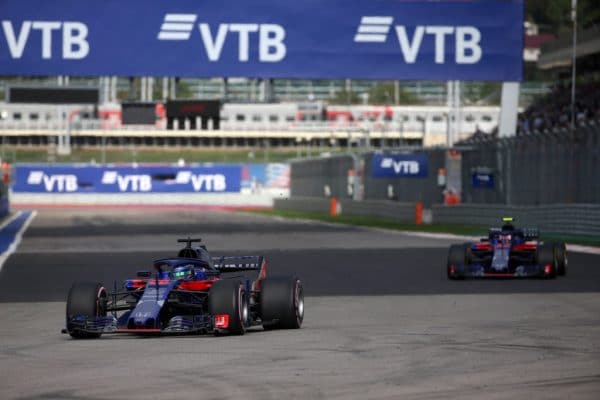 Who? A majority Russian state-owned airline

Spring 2017 saw Russian airline Aeroflot renew their Manchester United sponsorship deal, first signed in 2013, for a further five years. The deal is said to be worth $40 million, and sees the airline provide “strategic advice” on travel to the top-flight English team. One of Aeroflot’s planes has even been decorated with the Manchester United branding. 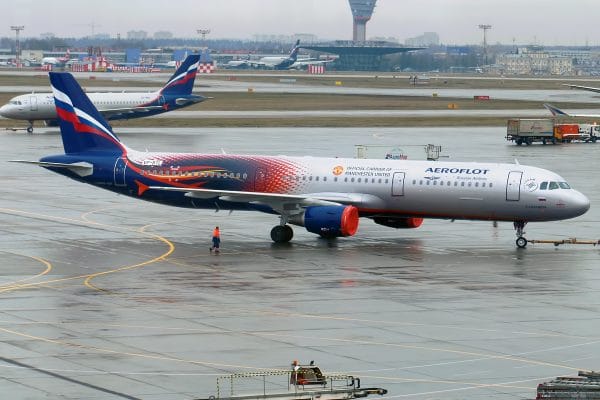 Who? A Moscow-based multinational anti-virus and cybersecurity provider

Kaspersky has sponsored the the most successful racing team in the world, Scuderia Ferrari, since 2010 – the brand can currently be seen on the cars, across the drivers’ helmets, and on the pit crew’s overalls, and the relationship also takes in work on Scuderia Ferrari’s IT systems. According to Kaspersky themselves, the relationship between cybersecurity and motor-racing is a natural one – think high performance, sophistication, and great results.

Complimenting their partnership with Abu Dhabi Racing, Kaspersky is also a sponsor of racing driver Amna al Qubaisi, also known as “The Flying Girl” – the first Middle Eastern woman to take part in Formula E motorsport tests and the first Emirati woman to win a Senior Max Title. According to Maxim Frolov, the company’s managing director for the Middle East, Turkey and Africa, Kaspersky is committed to helping young drivers from the UAE reach their potential in the long-term. 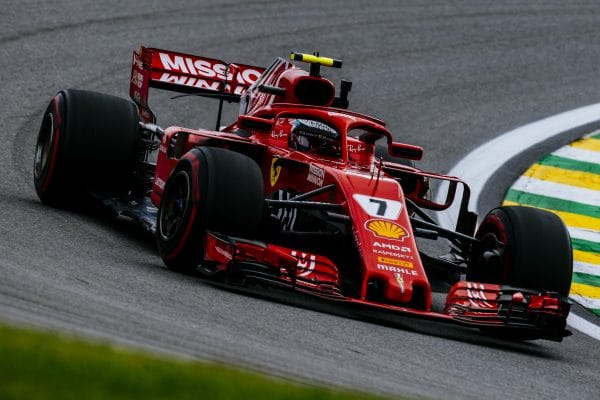 It’s not just abroad that Russia is seeking to utilise the “soft power” that APPS identifies as such a strong driver of its sports sponsorship strategy. Many of the Russian brands that are sponsoring sports in the UK and elsewhere in Europe are also investing in sports sponsorship in Russia itself – there are numerous examples, including Gazprom’s sponsorship of Russian Champions League number one Zenit St Petersburg, Rostec’s sponsorship of All Russia Gymnastics, and Aeroflot’s involvement in a huge range of sports – including the Russian Football Union, the Russian Olympic and Paralympic committees, the Volleyball Federation of Russia, the Boxing Federation of Russia, and the Russian National Cycling Team… to name but a few.

Lukoil, too, has a massive roster of sports sponsorship initiatives at home – including ice-hockey, cross-country skiing, volleyball, water polo, the national Olympic team, and, in motorsports, the Lukoil Racing Team. As part of the company’s support for people in the far north of Russia, where a lot of their oil production takes place, Lukoil even funds the region’s largest festival – a snowmobile race in honor of Russian polar explorer Artur Chilingarov.

What do all these investments have in common? They all have a “striking domestic focus”, according to APPS – something that ties back to the nation’s need to exert its dominance on a world stage, and remind everyone watching of its powerful history. Gymnastics, ice-hockey and boxing are just some of the sports that Russia has excelled in traditionally, suggesting that the companies investing in them are very aware of, and determined to build on, their country’s culture, heritage, and international brand. As APPs points out whilst discussing ice hockey, this “soft power sponsorship serves a role in creating and transmitting Russian identity.

All eyes will be on Sochi one again this autumn, when the Russian F1 race takes place. It’s an event that is likely to have Russian brands vying for attention – but what of that other motorsport giant, the MotoGP? Are we ever likely to see Russia investing in the two-wheeled race?

The reality is that, for MotoGP specifically, it’s hard to say – although we are starting to see Russian brands investing in bike sports, with carbon filter manufacturer Umatex Rosatom signing on as sponsor of WorldSBK and WorldSSP team Kawasaki Puccetti Racing in December 2018. Russian auto-parts producers PATRON is now also a sponsor of June 2019’s MXGP of Russia.

Russia’s interest in bolstering its own heritage and strength is the most likely reason that its biggest companies would look to invest in MotoGP in the future. If Russian riders can reign in the coming years of MotoGP, we could very well see the nation paying more attention to sports sponsorship in this area – and for this, we can only look to Russian riders currently in the lower ranks of MotoGP. So, will the future careers of riders such as the Red Bull MotoGP Rookies Cup’s Makar Yurchenko set Russia on a track to invest in MotoGP in the long-term? Only time will tell – but with Russia’s increasingly global outlook and interest both in sports sponsorship in Russia and outside of it, we’d do well to watch the careers of young Russian riders closely.