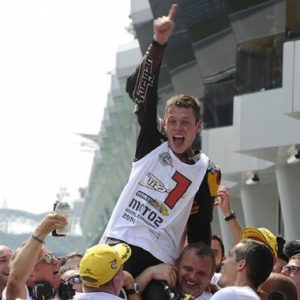 Once the MotoGP world title was brought to Spain two weeks ago by Marc Márquez in Motegi, the next spaniard follows his example. Esteve “Tito“ Rabat is now crowned the new Moto2 world champion. After dominating the season and fighting for the title with his teammate Mika Kallio, he was able to achieve his goal two weeks earlier. Rabat is known as one of the most hard working riders in the paddock and usually gets better with every lap.

In today’s race, the Marc VDS rider focused more on becoming world champion, rather than arriving at the top. After leading the race from the beginning, he let his teammate and Maverick Viñales pass him. All Rabat needed was a seventh or better place to secure his title. He ended the race in third position, with his pursuer Johann Zarco a good bit behind him.

Up front, the battle between his teammate Kallio and Viñales went on, but ultimately, the younger spaniard prevailed with few laps to go. The gaps between the first four riders opened up a bit, so that everyone crossed the finish line more or less on his own. It’s the fourth win for Maverick Viñales in this new class and a good sign for his future chiefs at Suzuki. Kallio finished in the position he had started into the race; as second.

Behind the new world champion in third place, frenchman Johann Zarco had beaten the chipped Dominique Aegerter, who suffered a feverish cold. In spite of all, Aegerter started as good as usual, but had to give up on Zarco towards the end of the race. But in view of the condition he was in, a fifth place is still a fantastic result.

The virtual second row was completed by Julian Simon, who showed a solid performance far ahead of Sandro Cortese, who finished seventh. He was, without a doubt, the most surprising rider. He started uncommonly good and stayed in second place at the very beginning, but somehow was passed back to seventh place during the race. But for sure, this strong starting phase showed that the german can be competitive.

Cortese was followed by swiss Tom Lüthi, who, after his win in Motegi and the second place in Phillip Island, surely expected a better result. Sadly it wasn’t to be, but he still is fourth in the overall standings, behind the three main title candidates.

Right behind Lüthi, Jonas Folger finished the race in ninth position and for that really deserved a, if there was such a thing, “fighter of the race“ medal. The AGR rider suffered from the incident between Nicolas Terol and Gino Rea, that took the second one out of the race. Both Terol and Folger were able to get on, but only the german bravely made his way through the field. He had fallen back to 23th place, but after a demanding catch up still finished with nine points for the overall standings.

Last one to complete the Top Ten is Folger’s fellow countrymen Marcel Schrötter. But, at the beginning, the most special gift for the Malaysian fans surely was Hafizh Syahrin, who seemed to be quite motivated to make best out of his home race. Unfortunately he was a little overly motivated and trashed his Kalex in the middle of the race, not being able to rejoin it again.

With two of the three championships having their winner, only the Moto3 class remains open. The battle will be fought between Álex Márquez and Jack Miller, who are divied by a difference of 11 points after this race.

Miller, who started from the Pole, had a good start, but unfortunately went wide in the first turn and let Efren Vazquez pass him. The spaniard is one of the smallest riders and it therefor looks like his Honda has the highest top speed. But actually, he’s just lighter and that’s what makes it possible to overtake his opponents on long straights.

While Vazquez has a weight advantage, Miller makes up everything with his braking skills. The aussie brakes later than any other rider, so after Vazquez overtook him on the straight, the attack followed shortly. This went on for a while, until Márquez came up on the scene.

He fell back at the beginning after starting from fifth position, but made his way up, just like his teammate Alex Rins, who started into the race as 17th after a ruined qualifying. Rins made short work out of the remaining field and was sixth with two laps into the race.

From there on, it was a battle between Márquez, Rins, Vazquez on Honda and Miller on KTM. Especially the two title contenders fought hard, which resulted a total of six contacs. The race direction investigated those contacts, but neither Miller nor anybody else got a penalty.

With few laps into the race, no rider in the leading group could be sure of his victory. Márquez closed the squad in fifth position, because he had fallen back due to one of the many battles. Danny Kent managed to get past him and finished fourth.

Alex Rins, who had the toughest time working himself through the field even made it to the podium. Maybe that’s a little comfort, since he’s out of the fight for the world champion title. But even if he won’t be the Moto3 champion, he still move up into Moto2 with Sito Pons, riding a bike way more suiting for his height.

This left the battle for the first place open to Miller and Vazquez. A battle that was won by Vazquez with a lead of 0.213 seconds in front of Miller. For sure this victory was due to his lighter weight and smaller stature, but for Vazquez it’s all about individual wins. In the overall standings, he can’t be a threat for Jack Miller, or also Márquez, anymore.

Behind the leading group, the remaining field was led by Alexis Masbou in front of Niccolò Antonelli. They were followed by Jakub Kornfeil, Karel Hanika and Enea Bastianini.

Romano Fenati and Brad Binder had go quit the race due to technical problems on their bikes.