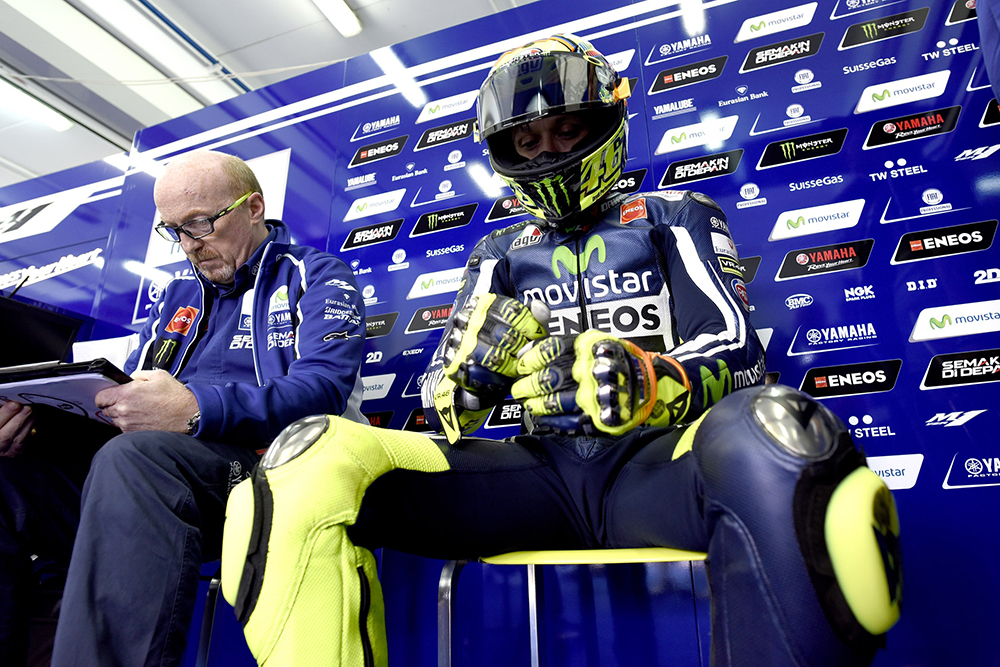 Four years after his last Pole in Le Mans in 2010, Yamaha factory rider Valentino Rossi claims his 60th Pole Position at the last Grand Prix in Valencia. The „Doctor“ improved with every practice, but still was surprised himself, when seeing his result on the monitors around the track.

Behind a wide-smiling Rossi, a no less happier Andrea Iannone entered the Parc Fermé. The Pramac rider quickly set the best time, with no one being able to close up. Only his fellow countrymen managed to displace him on the last lap. Nevertheless, Iannone looked satisfied with his result. It’s the fifth front row start for him in his whole MotoGP career.

Last to complete the first row is Repsol Honda rider Dani Pedrosa. Both Honda factory riders struggled through the session, with Pedrosa in sixth and Marc Márquez in seventh position. But whereas Pedrosa ended the qualifying without a mistake in third place, his teammate Márquez lost his front wheel and fell.

Luckily the world champion remained unhurt, but couldn’t but losing a few places. He was in second position, when he crashed and had to let his teammate Pedrosa, Valentino Rossi and Jorge Lorenzo pass. Márquez finished the qualifying as fifth.

Second Yamaha factory rider Lorenzo seemed less satisfied after the qualifying session. He started well, but unfortunately the spaniard couldn’t just keep up with the rest. But even with a start from second row, Lorenzo will be more than motivated to take the vice-world champion title from his teammate Rossi.

Behind Lorenzo and Márquez, a third spaniard completes the second row. Yamaha Tech3 rider Pol Espargaró, who suffered a serious feet injury at the Malaysian Grand Prix two weeks ago, provided a strong performance and was rewarded with a good sixth place in front of his teammate Bradley Smith as seventh.

They are followed by Ducati factory riders Cal Crutchlow and Andrea Dovizioso. Whereas Crutchlow started the session further up front in fifth position and unfortunately was passed back, Dovizioso kept struggling and therefor a ninth place was the only reachable goal.

LCR Honda rider Stefan Bradl had to compete in QP1 and, alongside Ducati test rider Michele Pirro, entered the second qualifying session. The german started very good, but weakened througout the session. Finally he was qualified as tenth, with Aleix Espargaró behind him in 11th place.

Michele Pirro was listed as 12th.